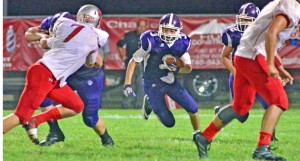 Chesapeake's Javon Thompson runs through a hole in the Symmes Valley defense as he picks up some yardage in the Panthers' 29-22 win on Friday. (Photo Courtesy Robert Stevens of The Gold Studio in Ironton)

The Panthers put their 0-2 start out of mind and turned their attention to the unbeaten Symmes Valley Vikings on Friday night.

The Panthers’ focus was rewarded as they rallied to beat the Vikings 29-22 in a backyard rivalry.

“Our kids went four quarters and didn’t give up. We got the lead in the first half and got some momentum and then scored to start the second half. We made some mistakes and they came back on us, but our kids didn’t hang their heads. They battled back and we made a big stop at the end.”

“We used it against St. Clairsville in the playoffs last year and had some success. Last night we were able to use it effectively. We mixed things up,” said Clark.

The evenly contested game was reflected by the statistics. Chesapeake had 371 total years with 349 on the ground while the Vikings had 372 total yards and 350 on the ground. Each team threw for 22 yards.

Jacob Collins led the Panthers with 120 yards on 12 carries with Nate Jones adding 99 on 12 attempts and Caleb Lindsey 68 yards on 11 tries.

Alec Herrell ran 11 times for 138 yards for the Vikings before leaving with severe leg cramps and two minutes left in the third quarter. He didn’t return.

Vikings’ quarterback Tyler Rowe ran 13 times for 100 yards. Halfback D.J. Miller was injured in the first quarter and did not return.

“We made some big plays, Chesapeake just made more,” said Vikings’ coach Rusty Webb. “Our kids played hard. We had our two best backs go down and we had guys step up. Untimely penalties, turnovers and injuries hurt us, but our kids played hard.”

After a scoreless first quarter, the Vikings (2-1) went 73 yards in just three plays as Herrell bolted 63 yards for the touchdown and a 6-0 lead.

The Panthers (1-2) answered quickly following a good kickoff return. They went 42 yards in three plays and scored when Jones picked up about 8 yards, was hit and fumbled the ball into the end zone where Collins jumped on the ball for the score.

Wesley Stevens kicked the point after for a 7-6 lead.

Symmes Valley began to drive but an interception gave the ball back to the Panthers who got to the Vikings’ 25. On fourth-and-10, Lindsey scrambled out of the pocket and scored. He also ran for the conversion and a 15-6 lead with 2:43 left in the half.

The Vikings fumbled on the first play after the second half kickoff and the Panthes took advantage as Lindsey scored on a 1-yard run and it was 21-6.

But the Vikings came right back with a 51-yard, six-play drive that saw Herrell run the final 15 yards to score. He also ran for the conversion and it was 21-14.

Again the Panthers answered in rapid fashion. Collins scooted 28 yards to culminate a 62-yards, three-play drive. Jones ran for the conversion and it was 29-22 with 6:43 left.

“Our offensive line did a nice job. They’ve been improving each week,” said Clark. “Our young guys toughed it out and didn’t lose confidence.”

The Vikings did drive to the Panthers 30, but a fourth down-and-4 pass was batted down and the Panthers were able to run out the clock.