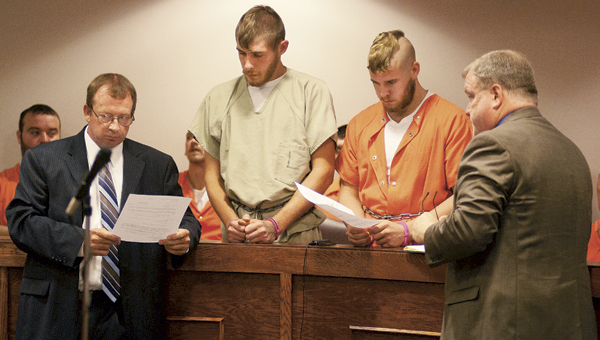 Calling it “meanness,” Ironton Municipal Court Judge O. Clark Collins Thursday handed down maximum sentences to two men who stood before him and admitted that yes, they did in fact go onto a neighbors’ property and kill two pet dogs.

Brian L. Sharp, 20, of 339 Township Road 324, and Jonathan D. Jiles, 20, of 27 Private Drive 380, both of Pedro, stood together with their attorneys and pleaded to guilty to first-degree misdemeanor prohibition concerning companion animals and criminal trespassing, a fourth-degree misdemeanor. Collins sentenced each man to a total of seven months in the Lawrence County Jail — six months for the first-degree charge and 30 days for the lesser charge. That was the maximum sentenced allowed under Ohio law for these crimes.

Authorities and the dog owners contend the dogs were confined to their own property at the time of the killings.

Collins further ordered the sentences be served consecutively, meaning each man will spend the next seven months in jail.

Both Jiles and Sharp will be on probation for three years after their release from jail.

Each man was fined a total of $1,250 and must jointly and severally, pay $800 restitution to the dogs’ owners, Michael and Josie Scythes. Collins ordered both men to stay away from the victims and issued an order that neither man ever own a companion animal.

“This is one of the meanest things I’ve seen done since I’ve been on the bench,” Collins said to Sharp and Jiles. “There’s no redeeming quality to it. This was pure meanness. The court is very upset about this.” Collins commended the dogs’ owners, Michael and Josie Scythes, for having behaved “with dignity” during the court process and said the Scythes had been very fair about their ordeal.

When asked if they had anything to say, Sharp and then Jiles apologized.

After the court proceedings, Michael Scythes said he was happy with the judge’s sentence because he did hand down the maximum sentence for the killings. Josie Scythes added, “They deserve more.”

The Scythes said they plan to work with the Nitro Foundation, an anti-animal cruelty group, to change laws regarding animal abuse and animal killing from misdemeanors to felonies.

A small group from the Greenup County, Ky., Humane Society attended the court proceedings to show their support for the Scythes. Valerie Ford, a humane society member, said she is pleased with Collins’ attention to this case and hoped the attention given to this case will spur lawmakers to make the necessary changes.

“People,” Ford said, “should not be able to do these things to any animal.”