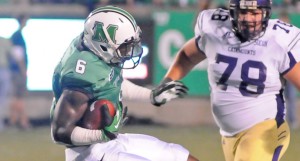 HUNTINGTON, W.Va. — What a difference a year can make.

Ohio routed Marshall 44-7 last season at Peden Stadium, but both Ohio coach Frank Solich and Marshall coach Doc Holliday know it will be a different story when the Bobcats visit Joan C. Edwards Stadium at 6:30 p.m. on Saturday in the Battle for the Bell.

“It’s big because it’s at home. Our kids enjoy playing at Joan C. Edwards Stadium so it should be a fun night,” said Holliday. “It’s gong to be a good night to come in against an excellent team. They’re getting votes in the top 25 and they deserve it. It will be a tremendous challenge.”

Ohio (2-0) won its opener 24-14 in an upset at Penn State. They rolled last week 51-24 against New Mexico State who is will join Conference USA next fall.

“They get a great following,” said Solich. “You’re going to face that. You do face it a fair amount on road games, sometimes more than others, and this will be one of those times where we’ll face a very high level of crowd participating.

“Obviously the O-Zone was at its best, and when they’re at their best they’re tough to beat.”

Both teams boast prolific offenses that could make for a shootout.

“When you look at Ohio University, you see an offensive line that is extremely physical. That’s where it starts,” said Holliday. “You add Tettleton to that group who is an excellent quarterback that can beat you with his feet. You have Beau Blankenship, the running back, in there that runs extremely hard. They also have some skill guys that can go play. Overall they create a lot of issues for you.”

Tyler Tettleton — son of former Detroit Tigers’ power-hitting catcher Mickey Tettleton — is an outstanding athlete at quarterback. He is 46 of 64 on the season for 581 yards on four touchdowns.

Tettleton has also rushed 16 times for 65 yards and two scores.

“He has great leadership skill and is extremely tough. He makes great decisions and you can tell by watching him play that he has great respect of his teammates. He’s what a quarterback is all about.”

Marshall quarterback Rakeem Cato is fifth in the nation passing in total offense. He is 70 of 96 for 790 yards and five touchdowns.

“He’s a very poised, very accurate quarterback. I think his completion percentage is somewhere around 73 percent, so that means that he’s getting the ball to his receivers and they’re catching it,” said Solich.

Cato’s favorite target is All-American candidate Aaron Dobson with 13 receptions for 153 yards and a score. Antavious Wilson had nine catches for 138 yards.

“They’ve got some outstanding receivers. Their skilled positions overall are really very good in terms of the passing game and the thrower and the guys catching it, and what theycan do with the catch and getting yards after the catch,” said Solich.

Freshman Kevin Grooms leads the Herd in rushing with 85 yards on 17 attempts. Travon Van has 78 yards on 26 carries and two touchdowns.

Buckeyes’ DL must step up pressure

COLUMBUS (AP) — There were a lot of questions about the 2012 Ohio State Buckeyes. One area where there were... read more