Ironton men cooking for good cause 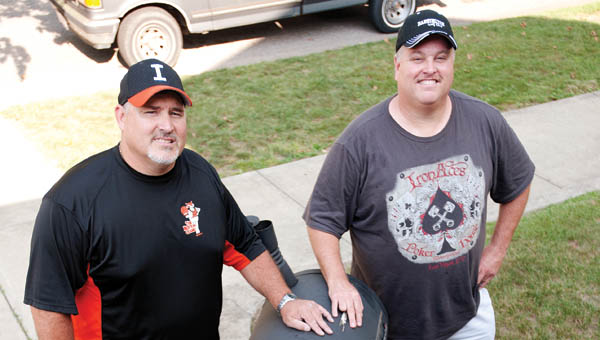 Ironton residents Shawn Jones and Jay Zornes have taken their love of cooking, particularly BBQ, and decided to use their culinary skills to raise money for local scholarships.

Billy Bruce | For The Tribune

Ten years ago, on Oct. 2, a 13-year-old child left Ironton and entered eternity.

With him, Shane Jones took the hearts and emotions of everyone who knew and loved him, especially his parents, Shawn and Patty Jones.

Despite his “never give up” attitude, beating back cancer with all his might during most of his lifetime, Leukemia finally won the battle with Shane.

But, true to their son’s mantra, Shawn and Patty refused to allow the disease to take his memory.

Beginning with the Ironton High School graduating class of 2005, Shawn and Patty awarded a $1,000 scholarship in Shane’s name to the senior who best exhibited Shane’s positive outlook on life, as well as his empathy and compassion for others.

The scolarship also bore the name of Shane’s most inspirational football coach, Jeff Carty, who died in a workplace accident a few years prior to Shane’s passing. Carty instilled the phrase “never give up” into Shane’s heart, a motto he carried with him for the entirety of his brief life.

Following the 2011 IHS graduation, after handing out their seventh scholarship in Shane’s honor, Shawn and Patty faced a difficult decision. The money they set aside when the scholarship began had run out.

“The last few years, we were paying for it out of our own pockets,” said Shawn, a lifelong Pepsi Cola employee. “It was hard to come up with $1,000 every year.”

As the graduation ceremony for the 2012 IHS class approached, the Joneses made the heartwrenching decision to cease awarding the scholarship.

Jay and Shawn have a friendship built on a love for sports and food, and a desire to help the students at IHS succeed in life.

For decades, Jay has worn multiple hats in the Lawrence County community as a promoter of civic pride, philanthropy and economic development. He and Shawn are diehard members of the Tiger Clan, a group whose unseen efforts support local student-athletes.

A few months ago, the duo engaged in a lighthearted, hypothetical conversation about utilizing their love for cooking to benefit kids in the community.

“And it hit me,” Jay said of that conversation. “I asked Shawn, ‘Why didn’t you give a scholarship this year?’”

While cooking out a few weeks later, with the conversation and Shawn’s answer still in his mind, Jay decided, “We can sell this stuff.”

He contacted Shawn with his idea and Holy Smokes Barbeque was born.

“I loved it,” Walter said, noting he bought five more pounds the next time Holy Smokes announced it was cooking.

Others, according to Jay, have placed standing orders for whenever he and Shawn fire up their smokers.

In fewer than three months, enough money was raised to revive Shane’s scholarship for the 2013 IHS class.

All future Holy Smokes proceeds will benefit Ironton student athletes via the Tiger Clan or fund other scholarships, such as the J.D. Coffman Memorial that Jay and his friend, Bruce Roach, initiated several years ago.

Due to time constraints created by their regular jobs, Shawn and Jay are able to fire up the Holy Smokes smokers only twice per month. Presently, they struggle to keep up with requests, but hope to upgrade equipment in the near future to satisfy demand.

“This is just a hobby for both of us,” Jay said. “We hope to be able to use this hobby to help others.”

For Shawn and Patty Jones, the combining of Shawn and Jay’s hobby has been a heavenly reminder to never give up.