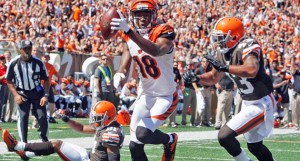 Cincinnat Bengals’ wide receiver A.J. Green holds the ball high as he runs into the end zone for a touchdown during Sunday’s game. The Bengals held on to beat the Cleveland Browns 34-27. (Courtesy of The Cincinnati Bengals)

CINCINNATI (AP) — For the final practice each week, Bengals coach Marvin Lewis orders his best receiver to the sideline to watch everyone else run the plays.

It’s done for a purpose, not punishment. Lewis wants the other Cincinnati receivers to see what they can do without A.J. Green getting the ball.

So far, it’s been a good lesson.

The Bengals (1-1) have found plenty of help for their Pro Bowl receiver during the first two games. Andrew Hawkins, Armon Binns and Brandon Tate have been keeping up with Green, just like in that final practice each week.

“On Fridays, I usually stick him right by me,” Lewis said, “and let everybody else go to work.”

Green was a blocker on the Bengals’ biggest plays Sunday during a 34-27 win over Cleveland at Paul Brown Stadium. Andy Dalton matched his career high with three touchdown passes, including a 10-yarder to Green in the first half.

Tate ran past a safety for a 44-yard touchdown catch that opened the second half and put Cincinnati in control. Hawkins turned a short reception into a 50-yard touchdown play in the fourth quarter.

Developing receivers to complement Green was one of Cincinnati’s offseason priorities. Against the Browns (0-2), they used everyone to full advantage. The Browns double-teamed Green, preventing him from making a game-breaking play.

With Green soaking up the defense’s attention, the other receivers had more room to maneuver.

“They crowded my side a lot and didn’t let me beat them over the top,” Green said. “I had to run short routes and make big plays open up. I’m willing to do anything.”

The most sensational play was Hawkins’ clinching touchdown. Dalton scrambled to his right to avoid the rush and saw Hawkins open about 10 yards downfield. Once the 5-foot-7 receiver got the ball, he eluded several defenders and got blocks from the other receivers.

Green threw the final block on the play as Hawkins reached the end zone.

“You have to be a complete receiver,” Binns said. “We have to put out effort at all times, even when the ball isn’t in our hands. It felt good to help Hawk get in there for his first touchdown.”

It was the first NFL touchdown for Hawkins, who played two years in the Canadian Football League before finally getting a chance last season with the Bengals. His brother, Artrell, was a Bengals cornerback.

“It’s an incredible feeling,” Hawkins said. “I didn’t think I’d ever be at this point. Ever. I’m so appreciative and thankful to be where I’m at.”

“It’s something to build on,” Hawkins said. “It’s only the second week of the season. We have a long way to go, but there are a lot of positives.”

Not on defense. The Bengals fell to 30th overall in the rankings after allowing Brandon Weeden to have one of the best games by a Browns rookie quarterback and Trent Richardson to run for more than 100 yards and score on both a run and a pass.

Lewis thinks the defense is pressing, with players trying too hard to make an impact.

“You can’t win many football games in the National Football League when you give up whatever we gave up in points yesterday,” Lewis said. “I know that for a fact. It’s difficult to score as many as we did. You have to play better defense, and you can’t give up explosive plays like we did.”

NOTES: Lewis had no update on DE Jamaal Anderson, who hurt his left knee in the fourth quarter and left on a cart. Anderson signed with the Bengals as a free agent from Indianapolis in the offseason and was the backup at right end. … Lewis said there were no other significant injuries from the Cleveland game. He left open the possibility that RB Bernard Scott (hand) and DE Carlos Dunlap (knee) could return this week. They were inactive against the Browns.

COLUMBUS (AP) — His team hasn’t lost and it has a quarterback who has stamped himself as one of the... read more