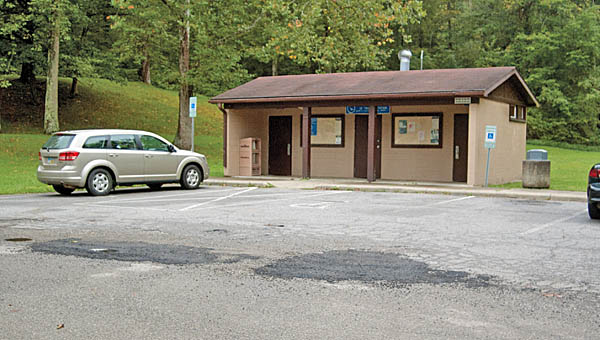 PEDRO — Once upon a time Ellisonville Park was a lifesaver for the motorist chugging up and down State Route 93.

Back in 1939 when the park was built, rest areas were few and far between. And McDonald’s was still a carhop joint out on the West Coast.

But today, with franchised restaurants and strip malls dotting the highways, places for bathroom breaks can be found with great ease.

Because of that, plus the reality that plumbing only lasts so long, the Ohio Department of Transportation is considering shutting Ellisonville down.

“We are in preliminary discussions with Wayne National Forest to let them know we are talking about removing the buildings,” Kathleen Fuller, public information officer for ODOT District 9, said.

ODOT has a permit with the Wayne National to use about 10 and one-half acres of the forest for the rest area. For this kind of rest area ODOT either has a permit or an easement with the private property owner.

“We approach the owner of the property to discuss this with them,” Fuller said. “If there is no interest determined, we will close it. ODOT will take care of the removal.”

Ellisonville is classified as a primitive rest area. It is one of 17 such areas originally built in District 9 and one of two in operation. A primitive rest area means it is not a modern facility with flush toilets and is costly to maintain.

Over the past two and a half years, ODOT has spent $85,000 to maintain the area.

“That includes structural work, major maintenance, custodial care, mowing, pumping and cleaning,” Fuller said. “Roadside rest areas have outlived their usefulness. We have had a lot of maintenance problems with our primitive rest areas. Some of them have gone back to the 1930s. These primitive facilities are in seriously failing condition and there are different issues with each of them.”

One of th e major problems is that the underground vaults that hold waste are cracked and would have to be removed if the facility were to be upgraded.

“We could spend a lot of money to replace and rebuild a modern facility,” she said. “But do we spend the money to upgrade when we don’t have the money? It is the use factor. If it not being used as a roadside rest stop, we can’t spend the money.”

The Lawrence County Commission was told about the possible closing by Tim Slone, WNF Ironton District Ranger, at a recent commission work session.

“We would probably be against that,” said Commission President Les Boggs who asked Slone if the forest would take over the park.

The property owners of these rest areas can keep the facilities there, but would have to maintain them, Fuller said.

Slone estimated maintenance costs for Ellisonville would range from $25,000 to $30,000 a year.

“We are not keeping up with the trails and recreation areas now,” Slone told Boggs. “We would hate to take on more.”

Boggs noted that the park is used during the summer as a location for family reunions.

“We don’t want people to think this is happening tomorrow,” Fuller said. “This is preliminary. We may want to terminate the permit. We will remove the structure unless (the property owner) wants to maintain it or has a need. Whatever state we acquired it, that is how we leave it.”

A volunteer at the Ohio University Southern Horse Park leads a therapy rider around the ring. A therapy program operated... read more