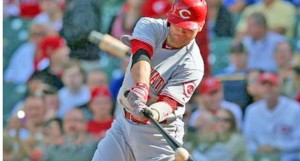 Cincinnati’s Joey Votto delivers a pinch-hit RBI single in the Reds 5-3 win over the Chicago Cubs on Thursday. The win enabled the Reds to clinch a playoff spot in the postseason. (Courtesy of The Cincinnati Reds)

CHICAGO (AP) — Dusty Baker was missing when the Cincinnati Reds became the first team in the majors to clinch a playoff spot. The main man in the dugout was sidelined Thursday for a second straight game after being diagnosed with an irregular heartbeat.

“Obviously we won the last two games for him. We have him in our thoughts, but we got good news on his update,” reliever Sean Marshall said after a 5-3 victory over the Chicago Cubs.

“Hopefully he’ll be back with us tomorrow and when it really matters, when we clinch (the division). Hopefully we get to celebrate this weekend with him,” he said.

Ace Johnny Cueto and the NL Central leaders ensured themselves of at least a wild-card spot. Cincinnati cut its magic number to two for winning the division for the second time in three years.

The Reds said Baker would remain in a Chicago hospital for an additional day so doctors could monitor his progress. The manager left Wrigley Field before Wednesday night’s game and underwent another test Thursday.

Baker is expected to return to Cincinnati on Friday. Bench coach Chris Speier ran the team for a second straight game.

“He looked good. Very good. He’ll be there tomorrow,” said general manager Walt Jocketty, who visited Baker on Thursday morning. Jocketty said he didn’t know if Baker would be able to manage when the Reds open a series at home against the Dodgers.

“”Chris Speier did an excellent job, but I think he’s (Dusty) missed and we’re looking forward to having him back, and more importantly, we’re hoping for the best with his health,” star first baseman Joey Votto said.

“I know he’s excited and happy, just wish that he was here to partake in it, but he’ll be back soon,” Speier said.

The Reds broke a scoreless tie by getting five straight singles off reliever Manuel Corpas (0-2) in the seventh during a five-run rally capped by Henry Rodriguez’s two-run double.

Chicago starter Jason Berken allowed just two hits in six innings against a lineup missing most of the Reds’ regulars.

“I was able to get a couple of jams, great defense behind me, stayed on the same page the whole game,” Berken said.

“I don’t think that was the best stuff he’s ever had. You can tell he might be getting a little tired at the end of the year or whatever, but I’ve seen him with a lot better stuff,” Chicago manager Dale Sveum said.

The Cubs scored in the seventh on Anthony Rizzo’s RBI single and in the eighth on Welington Castillo’s fifth homer again. Rizzo had an RBI grounder in the ninth against Alfredo Simon, who pitched the final 1 1-3 innings for his first save in as many chances.

The Reds secured their second playoff appearance in three years despite having the back of their bullpen wiped out by injuries during spring training and losing their best hitter — 2010 National League MVP Votto — for nearly two months.

Baker did some of his best managing to pull them through.

His first challenge was cobbling together a bullpen after closer Ryan Madson tore an elbow ligament in spring training, ending his season. Setup men Nick Masset and Bill Bray also got hurt before the season opened.

Baker eased Aroldis Chapman into the closer’s role, and the hard-throwing left-hander set a franchise record with 27 consecutive saves.

Baker also had to juggle his batting order and lineup after Votto tore knee cartilage and was sidelined on July 16. The Reds went on their best tear of the season without their top hitter, going 32-16 and taking control of the NL Central.

There was some good fortune, too. All five starters have made it through the season without injury, a franchise record. The Reds had to use a sixth starter only because of a doubleheader.

By the time September started, the Reds were firmly in control and counting down the days until they’d clinch.

“This is the first step,” Jocketty said.

NOTES: Cueto’s two strikeouts gave him a career-best 159. … Reds 2B Rodriguez and CF Denis Phipps made their first career starts and SS Didi Gregorius started for just the fourth time. … The Cubs stay home to play the wild card-contending Cardinals with Chris Carpenter (0-0) set to make his season debut against Chris Volstad (3-10). … The Reds will start Bronson Arroyo (12-8) at home against the Dodgers’ Joe Blanton (9-13) on Friday night. … Berken, picked up on waivers from Baltimore earlier this month, struck out four batters in one inning — the fifth Cubs pitcher to ever do that — when Ryan Hanigan reached on a third strike wild pitch in the second.

COLUMBUS (AP) — Now that more than a year has passed since Luke Fickell was dropped into an almost unwinnable... read more