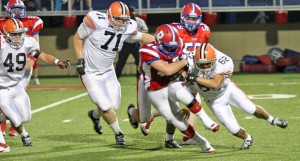 PORTSMOUTH — This was a game of offense.

The Ironton Fighting Tigers racked up 521 yards to 458 for the Portsmouth Trojans in a 61-34 win on Friday.

Patrick Lewis ran just six times but gained 165 yards and scored three times on runs of 66, 15 and 66 yards as he played less than two quarters.

Ironton quarterback Tanner Dutey was 5 of 5 passing for 124 yards with TD strikes of 64 yards to Trevor White and 29 yards to Dion Brown. Backup quarterback Tristan Cox ran 99 yards for a touchdown and finished with 135 yards on five carries.

Portsmouth (1-4) was led by Johnie Charles with 156 yards on 29 carries, quarterback Brandon Wedebrook who was 16 of 27 for 214 yards and two interceptions, and receiver Alex Dickerson with 11 catches for 155 yards.

Herrell had touchdown runs of 6, 82 and 23 yards in the first half while Miller returned a punt 88 yards for a score and then ran 77 and 41 yards for touchdowns.

Quarterback Will Howard was 7 of 8 passing for 83 yards for the Indians (5-0). Howard ran for two scores and threw for three more.

PROCTORVILLE — Top-ranked Bishop Hartley racked up 553 total yards in a 56-6 win over the Fairland Dragons on Friday.

Tyree Ceasar ran 23 times for 83 yards and his 1-yard run with 7:14 left gave Fairland its only touchdown.

WEST PORTSMOUTH — The Portsmouth West Senators rallied from a 12-7 halftime deficit to beat the Chesapeake Panthers 21-12 on Friday.

The Panthers (1-4) scored first on a 49-yard pass from Caleb Lindsey to Javon Thompson.

Crace had a 1-yard scoring run in the third quarter and added a 26-yard TD run with just 18 seconds to play.

COLUMBUS — Coal Grove scored first on a 3-yard run by Brandon Hogsten for an 8-0 lead, but the Silver Knights tied the game and then outscored the Hornets 36-0 in the second quarter en route to the 72-20 win on Friday.

Quarterback Matt Yoho threw four touchdown passes and scored on a 6-yard run in the fourth quarter to lead Ready (5-0).

McDERMOTT — The Green Bobcats improved to 3-2 on the season with a 33-15 win over the Northwest Mohawks.

Rob Applegate ran 18 times for 108 yards and caught a 5-yard pass from quarterback Chris Applegate who ran 15 times for 78 yards and three touchdowns himself.

The Bobcats led 14-8 at the half and scored 12 points in the third quarter on touchdown passes to Rob Applegate of 5 yards and Mark Allen from 13 yards out.

The Village of South Point has issued a boil water advisory for parts of the village until Monday afternoon. The... read more