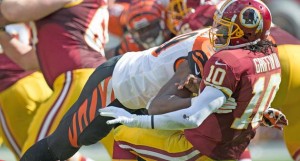 “It’s tough overthrowing that man,” Sanu said. “I just put it where he could go get it.”

The Washington Redskins fans came to see some razzle-dazzle in Robert Griffin III’s home debut. They saw Dalton and the Cincinnati Bengals do it better.

Sanu-to-Green was just the opening statement in a game full of innovative plays, fancy moves and mood swings. The Bengals produced three first-half touchdowns on plays that snapped the ball to three different players, blew a 17-point lead, rallied in the fourth quarter and survived a bizarre final sequence Sunday in a 38-31 win over the Redskins.

“The creativity that we’ve got here, talent that we have at wide (receiver), the running backs, the different things that we’re doing, it’s big,” Dalton said. “You try to find a way to get an advantage in the game, and we found a couple today.”

The Bengals (2-1) have made their reputation on defense, but now their offense looks in step with the evolving score-a-whole-lot-every-week NFL. Cincinnati’s offense has put up 30-plus points in back-to-back weeks for the first time since November 2006.

“We’re making plays,” Green said, “all over the field.”

No doubt about that. They ran several end-arounds, used a no-huddle package that befuddled the Redskins, let BenJarvus Green-Ellis take a direct snap on a 1-yard touchdown run and had touchdown completions of 48, 59 and 73 yards.

Dalton completed 19 of 27 passes for 328 yards and three touchdowns. Green caught nine passes for a career-high 183 yards and a score. The game was tied at 24 when Dalton led a pair of long fourth-quarter drives, hitting tight end Jermaine Gresham on a 6-yard completion to take the lead and Andrew Hawkins down the middle for a 59-yard strike that gave the Bengals a two-touchdown cushion with 7:08 left to play.

But Griffin has quickly proven that he’s hard to shut down. He brought the Redskins (1-2) back from a 24-7 deficit, then nearly pulled even again after being down 38-24. His 2-yard run at the end of a 90-yard drive cut the lead to 38-31 with 3:35 remaining, and a potential game-tying drive went from Washington’s 2 all the way to Cincinnati’s 19 in the final two minutes.

Then it got weird. Griffin was sacked for a 15-yard loss. Then he spiked the ball with 7 seconds left. Then tight end Fred Davis was called for a false start. Then coach Marvin Lewis and the Bengals, anticipating a 10-second runoff, thought the game was over and walked onto the field en masse. Then an official called an unsportsmanlike conduct penalty on a livid Redskins sideline.

The officials — replacement refs while the regulars are locked out in a labor dispute with the league — marked off a total of 25 yards for the two penalties, instead of 20.

All of which meant the game ended with Griffin’s long incompletion on a third-and-50 from Washington’s 41.

It was the second straight week in which an unsportsmanlike conduct penalty thwarted a Redskins drive that could’ve tied the game in the final two minutes. Last Sunday, Joshua Morgan threw the ball at another player in a three-point loss to the St. Louis Rams.

“We can’t have those type of things in those situations,” Griffin said.

Morgan took responsibility immediately after his gaffe, but coach Mike Shanahan was evasive after Sunday’s game when asked about the final penalty, other than to indicate there was apparent confusion among the officials.

“They threw the flag at us — and there was half of the (Bengals) football team on the field,” Shanahan said. “I was disappointed in that.”

Griffin repeatedly took a pounding, taking six sacks as he completed 21 of 34 passes for 221 yards and one touchdown. He also ran 12 times for 85 yards and lost a fumble on a jarring hit by Carlos Dunlap, who was making his season debut after missing the first two games with a sprained right knee.

The Redskins had a first-quarter touchdown scored by the defense and a second-quarter field goal set up by a long kickoff return, so it wasn’t until the opening drive of the third quarter that the reigning Heisman Trophy winner found some offensive rhythm, more than doubling Washington’s total yardage output with an 80-yard drive capped by Alfred Morris’ 7-yard run.

A 3-yard pass to Santana Moss tied the score in the third quarter, and the Redskins had all the momentum when they forced the first fumble in Green-Ellis’ five-year career near midfield on Cincinnati’s next drive.

But Michael Johnson’s third sack forced Washington into a three-and-out. A few minutes later, Dalton led the first of the two long drives that put the Bengals ahead for good, handing the Redskins their seventh straight home loss.

NOTES: The Redskins played most of the game without LT Trent Williams, who injured his right knee and will have an MRI. Washington CBs Cedric Griffin and Crezdon Butler left the game with hamstring injuries. … Cincinnati played without cornerback Leon Hall (injured calf).

CINCINNATI (AP) — The Dodgers know that their latest win has to be the start of something spectacular. Adrian Gonzalez... read more