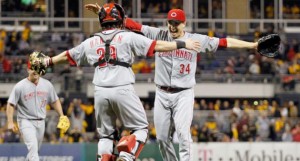 Cincinnati pitcher Homer Bailey (34) celebrates his no-hitter with catcher Ryan Hanigan (29) as the Reds blanked the Pittsburgh Pirates 1-0 on Friday. Bailey's no-hitter was the first by a Reds' pitcher since 1988. (Courtesy of The Cincinnati Reds.com)

PITTSBURGH (AP) — Homer Bailey had a certain milestone on his mind when he walked to the mound Friday night. He wound up pulling off an even bigger feat.

Bailey pitched the seventh no-hitter in the majors this season, leading the Cincinnati Reds to a 1-0 victory over the Pittsburgh Pirates.

The right-hander began the night with 195 innings pitched this season and was eager to reach 200 for the first time in his six-year career.

“I looked up at the scoreboard (after the fifth inning) to see if I had hit 200 and saw a couple of zeros,” Bailey said. “That’s when I knew I had a chance at a no-hitter. It’s not something you think about doing.”

It was the 15th no-hitter in Reds history and first since Tom Browning’s perfect game against the Los Angeles Dodgers on Sept. 16, 1988.

The seven major league no-hitters match the modern record for one season, tying 1990 and 1991. There were eight no-hitters in 1884.

“I don’t think there is any reason why there have been so many,” Bailey said. “There is a real fine line there in throwing a no-hitter. A bloop can fall in the outfield or an infielder can be in the wrong position and there goes your hit. You have to be extremely fortunate to throw a no-hitter and we had luck on our side tonight.”

Bailey (13-10) struck out 10 and walked one. He threw 115 pitches and retired the side in order in the ninth, striking out pinch-hitter Brock Holt before getting pinch-hitter Michael McKenry and Alex Presley to pop out.

When second baseman Brandon Phillips caught Presley’s popup on the outfield grass, Bailey was mobbed near the mound by happy teammates and doused with water.

The 26-year-old Bailey improved to 5-0 with a 1.40 ERA in six career starts at PNC Park. All three of his complete games and both his shutouts have come against Pittsburgh.

It was the first time the Pirates had been held hitless since Hall of Famer Bob Gibson pitched the lone no-hitter of his career in 1971 for the St. Louis Cardinals.

Cincinnati, which clinched the NL Central title last Saturday, improved to 95-62. The Reds are tied with Washington for the best record in the NL.

Bailey has been touted as a future ace since Cincinnati selected him seventh overall in the 2004 amateur draft following his senior year of high school in LaGrange, Texas.

He has a 38-33 career record and has set a season high for wins. Reds bench coach Chris Speier, serving as acting manager while Dusty Baker recovers from a mini-stroke, thinks the no-hitter could serve as a benchmark moment for Bailey.

“He’s always been a good thrower, but he’s really learned how to pitch this season,” Speier said. “You saw the evolution tonight.”

The other no-hitters this season were thrown by Philip Humber of the Chicago White Sox, Jered Weaver of the Los Angeles Angels, Johan Santana of the New York Mets, Matt Cain of the San Francisco Giants, Felix Hernandez of Seattle and a combined six-pitcher effort by the Mariners. Humber, Cain and Hernandez each had a perfect game.

Pittsburgh (76-81) made its own bit of history as it was assured of a 20th consecutive non-winning season with the loss, extending its major North American professional sports record.

Pirates manager Clint Hurdle said Bailey had more than luck going for him. Hurdle sensed Bailey and catcher Ryan Hanigan were on the same page right from the first inning.

“They were spot-on with almost every pitch,” Hurdle said. “He kept throwing fastball up and away and breaking balls down and in and it was just an effective combination.”

It was also the first no-hitter caught by Hanigan, who broke into the majors with Bailey in 2007.

Bailey retired his first six batters before third baseman Scott Rolen booted Clint Barmes’ leadoff grounder in the third inning for an error. Bailey then set down 13 straight until walking Andrew McCutchen with one out in the seventh while clinging to the one-run lead.

McCutchen stole second but then was thrown out by Hanigan attempting to steal third. Garrett Jones flied out to the warning track in right field to end the inning.

With the Reds employing a defensive shift, left-handed hitter Pedro Alvarez lined out to Rolen in the eighth.

“I thought the no-hitter was gone when Alvarez hit that ball, but fortunately the shift was on,” Bailey said.

“The way A.J. pitched, it was going to take almost nothing short of a no-hitter to beat him,” Hurdle said.

The Reds scored in the first inning on Frazier’s sacrifice fly after loading the bases with no outs on singles by Phillips and Zach Cozart and a walk to Joey Votto.

Phillips, Cozart and Rolen all had two hits.

NOTES: Speier said he had a telephone conversation with Baker, who has missed the last nine games. Speier said the veteran manager “is feeling very, very good and looking forward to getting back.” Baker is scheduled to rejoin the Reds on Monday night when they open a three-game series at St. Louis to end the regular season. … Pittsburgh 2B Neil Walker will miss the rest of the season because of lower back soreness that has limited him to eight games in September. … Reds LF Ryan Ludwick, who has missed eight straight games with tightness in his left groin, is expected to return to the lineup Sunday. … Cincinnati RHP Mike Leake (8-9, 4.73 ERA) will face Pittsburgh RHP Kyle McPherson (0-2, 3.54) on Saturday night.