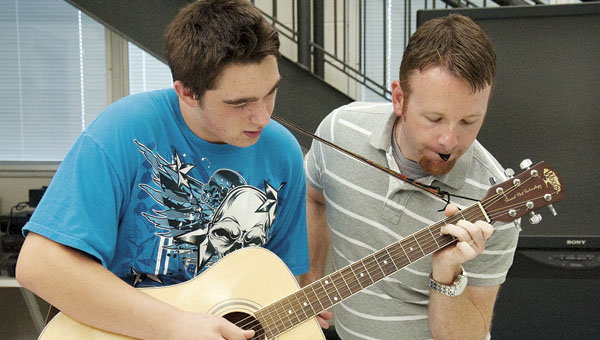 COAL GROVE — Jimi Hendrix, arguably one of the greatest guitarists who ever lived, once said, “Sometimes you want to give up the guitar, you’ll hate the guitar. But if you stick with it, you’re gonna be rewarded.”

For two Dawson-Bryant High School teachers, they hope students will stick with their new guitar mentorship program and reap the rewards of their practice and hard work.

Social studies teacher Derek Parsons and technology instructor Tyler Waller have more than 30 years of guitar experience between the two of them, so they decided to form a program to share their knowledge of the instrument, while providing mentorship and advice outside of the classroom.

“This gives us a way to interact with the kids,” Waller said. “Bridging the gap between student and teacher.”

Parsons and Waller will teach guitar fundamentals to the students during lunch a few days a week.

Besides guitar basics, the teachers hope students will open up to them if they are having problems at school or at home, use the music as a way to vent, or keep them from getting into trouble. The program will also pair students together who may not have otherwise gotten to know each other before.

So far, student response for the program has been overwhelming. More than 30 have signed up for mentorship, including tenth grader Tori Holmes.

“I want to learn to play more,” Holmes said. She started teaching herself over the summer, a few chords here and there. “I was really interested when they told me about (the program).”

Senior Justin Mullens signed up for the program, too, even though he has played guitar for about six years.

With his experience, Parsons and Waller said Mullens, and others with guitar skills, could help teach some basics to some of the students in the large group.

“I thought it sounded like a good idea, fun,” Mullens said.

The teachers said they have already gotten approval from the board of education to have the program, but the only thing standing in the way is funding.

Waller said Marathon has already donated $1,000 to the program, which leaves about $7,000 more to go.

The initial investment will cover the cost of 11 guitars, capos, sets of strings and other accessories. Many students have their own guitars and have chosen to use those. Waller said musical instrument store 4 O’Clock Rock in Ashland, Ky., has already agreed to give the group discounts on purchases made there.

During the year, each student will be assigned a guitar. They will check it out, much like a library book, and their parents will sign a waiver.

Parsons and Waller said they hope to get the program going in about four weeks, or by the beginning of next semester.

Anyone interested in donating equipment or funds for the program can call Dawson-Bryant High School.