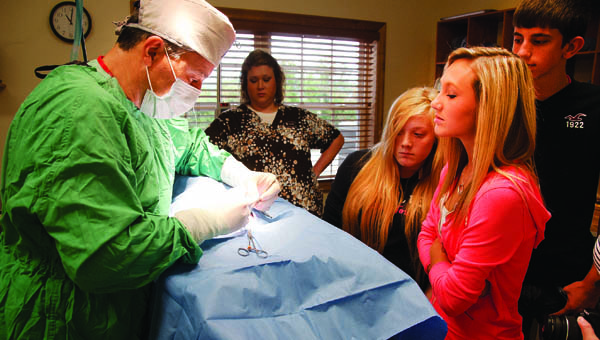 PROCTORVILLE — Recently, the Rock Hill Science Club had a bake sale to raise money for a rescue dog’s spaying surgery and Friday, a few members were given the opportunity to see the operation they funded.

“I love animals,” said Laura. “I’ve always loved animals and I’ve always wanted to be a vet, too.”

“I want to work with animals when I get older,” Austin said.

Ginger was found at the Lawrence County Dog Shelter by local animal rescuer Cyndi Anderson. Anderson said Ginger had just had a litter of puppies and was malnourished. After much care, Ginger was ready for the spaying operation.

At the clinic, vet technician Claudia Cyrus gave the students a tour of the facility and walked them through Ginger’s prepping before surgery.

The students saw Ginger receive anesthesia, get intubated and receive an IV catheter, which was donated by Dyer.

In the operating room the students watched as Dyer made his initial incision and performed the spaying, pointing out internal organs, tissues and ligaments along the way.

Dyer also talked to the students about his profession and what they could be in store for in the field of veterinary medicine.

“The key is not to panic,” Dyer said about performing surgeries. “It’s just like plumbing. If you have a leak, find it and fix it. Be relaxed and confident in what you are doing.”

Dyer said he frequently allows students to job shadow, where he explains the career.

“Make sure it’s what you want to do,” he said. “… Don’t sell yourself short. Don’t let a few years of college stand in your way.”

After the surgery, the students watched as Ginger woke up.

Madeline, who before the surgery said she wanted to be a vet, hadn’t changed her mind.

“I liked everything,” she said. “From incisions to the sewing.”

In addition to helping Ginger get her operation, the club has worked with Anderson to get a taste of just what it takes to work with and help abandoned animals. The group has volunteered time at Ashland Animal Rescue Fund in Ashland, Ky., as well as gotten certifications to work for the Ohio Horse Park’s therapeutic riding program.

Co-advisor Samantha Lister said there are about 75 members in the club.

“We are really trying to be service-oriented this year,” Lister said.

Anderson said she hopes other schools will want to join her to help with rescue efforts.

“I’m looking for schools interested in helping with donations and adoption events,” she said.