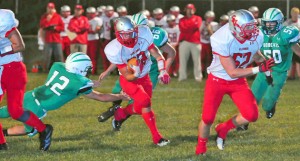 The Chesapeake Panthers and Fairland Dragons are getting better. Now the question is, “Which team is the best?”

“They’re vastly improved from what they were,” Fairland coach Dave Carroll said about the Panthers.

“They lost the (Chad) Meadows kid, but their fullback (Jacob Collins) has stepped up. He had a big game last week. He runs hard and (Nate) Jones runs hard. The quarterback (Caleb Lindsey) is throwing the ball well and (T.J.) McCoy on defense is everywhere. And the line is doing well.”

“Fairland has improved. You can’t judge them off their last two games,” said Clark. “South Point is really young and Hartley is head-and-shoulders above everyone. They beat West and that means something.”

Not only do the teams appear even, Clark said they are very similar physically.

‘We match up with them well. Size-wise we’re more similar, but you never know,” said Clark.

“If (Nathan) Campbell plays, he’s a difference maker. He has that speed that makes you miss him and he’s hard to tackle. And (Tyree) Ceasar runs hard and he has good strength. They’re pretty multiple on offense, so defensively we have to get lined up.”

Carroll said the Panthers’ have developed a balance on offense that will challenge Fairland’s defense.

“Chesapeake been able to run the ball and pass the ball. They should have won the game against West. League-wise, they’re pretty sound. They’re getting a lot better quickly. If we don’t show up to play, we’re in trouble.,” said Carroll.

“This game will boil down to turnovers and penalties. The team with the less of those will be the winner.”

There are a lot of similarities in this match up and not just the records.

Both teams do enter the game 0-6 and 0-1 in the Ohio Valley Conference, but these teams very young and have been saddled by injuries.

Rock Hill fell 62-7 last week to Coal Grove who was the preseason pick to win the conference. South Point fell 41-6 to Fairland, a team picked to challenge Coal Grove for the league title.

South Point quarterback Gage Townson was hurt in last week’s game and Austin Majher come on in the second half and hit 5 of 7 passes for 123 yards and a touchdown.

Rock Hill switched to Gabe Marzicola to play quarterback and moved Jonah Cox to running back and he responded with 106 yards on 13 carries.

However, those Coal Grove narrow escapes usually come at River Valley and this game will be played at Jim Lemaster Stadium.

The Raiders have a solid running back in Kyle Brown who gained 126 yards on 30 carries in last week’s 54-27 loss to Chesapeake. River Valley’s quarterback is Austin Whobrey.

This will mark the final game between the two teams. River Valley enters the Tri-Valley Conference next season.

The Vikings’ task this week is simple: Stop Justin Crager.

The Sciotoville East quarterback ran for more than 1,000 yards just three games into the season and was on a pace to break the state single-season rushing record.

But Crager has been slowed down the past two weeks including last week when Oak Hill beat the Tartans 49-0.

Crager was held to 99 yards on 16 carries and 46 yards came on one attempt.

Symmes Valley (5-1, 1-0) needs a win to set up next’ week’s showdown at home against Oak Hill that would decide the Southern Ohio Conference championship.

The Green Bobcats will make the long road trip to play at Waterford in a non-league game.

Fishing in Ironton area good if you know how

The other day I wuz talkin’ football with some of the guys from the Lawrence County Bass Club and the... read more