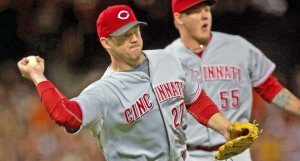 SAN FRANCISCO (AP) — Brandon Phillips still sees the highlights of his weak grounder for the final out in Roy Halladay’s no-hitter of the Cincinnati Reds in an embarrassing playoff opener two years ago.

Now, Phillips and the Reds have their own memorable winning playoff moment. After losing their ace, no less.

Sam LeCure, Mat Latos and three other pitchers shut down San Francisco after Johnny Cueto went out in the first inning with a back injury, and Cincinnati was powered by home runs from Phillips and Jay Bruce to beat the Giants 5-2 in Game 1 of the NL division series Saturday night.

Phillips hit a two-run homer in the third, and Bruce added a solo drive leading off the fourth as the Reds overcame the departure of their 19-game winner after just eight pitches.

Phillips added an RBI single in the ninth for his third hit and the Reds scored another on a passed ball. This one takes some of the sting out of that short-lived 2010 run.

“I still see it now. They always show it on TV. They show me on TV making the last out, and it kind of (stinks),” Phillips said. “But honestly I’m glad it did happen.”

Aroldis Chapman gave up a run in the ninth on a wild pitch but struck out Buster Posey with a 100 mph fastball to end it with runners on second and third.

That same year, Cincinnati was swept out of the first round by the Phillies after getting no-hit by Halladay. This time, the Reds clobbered Cain and played on with poise when Cueto got hurt.

“The pitch to Bruce wasn’t too terrible but the hanging breaking ball to Phillips is just something that you don’t want to happen in a big-game situation like this,” Cain said.

Reds skipper Dusty Baker earned an emotional win in his return to AT&T Park for the playoffs 10 years after managing the Giants within six outs of a World Series title before losing to the wild-card Angels. He’s also back on the top step of the dugout after rejoining the team this week following an 11-game absence while recovering from a mini-stroke and irregular heartbeat.

Game 2 is Sunday night, with right-hander Bronson Arroyo (12-10) taking the ball for the Reds against San Francisco lefty Madison Bumgarner (16-11).

LeCure did his part to calm the team.

The right-hander earned the win with 1 2-3 innings before Baker turned to 14-game winner Mat Latos, who appeared unfazed at being forced into early duty on three days’ rest. He allowed a home run to Posey during his four innings, but San Francisco managed little else against one of baseball’s best bullpens.

“We were just fortunate to win that game, like the way we did tonight, and you got to give big props to Latos,” Baker said. “Here is a guy sitting back, relaxed, thinking he was going to pitch next week at home and now all of the sudden, boom, this is his first playoff game. It was a great feat by him.”

Latos — a longtime Giants nemesis during his Padres days — threw a 20-pitch bullpen session before the game. When pitching coach Bryan Price checked with Latos, he made it clear he could go, then went up to the clubhouse to grab his spikes. He came in to boos from all directions.

“I felt real comfortable. It’s a team I’ve pitched well against and I’ve pitched against a lot,” Latos said. “I’m glad I got the loudest boo. It’s been weak for the last couple years.”

The Reds set a club record this year as all five starters made it through the season without getting injured — and they used their sixth starter for a doubleheader.

Other Cincinnati clubs might not have had it in them to withstand losing a starter like Cueto. The Reds have had a tough go come playoff time.

But Baker has long been confident in the “fight” of this bunch, which already dealt with losing Ryan Madson and two other relievers before the season started.

The 63-year-old Baker was greeted by a rousing ovation during pregame introductions from an orange-towel-waving sellout crowd of 43,492. The main center field scoreboard read “WELCOME BACK DUSTY GREAT TO SEE YOU BACK IN THE DUGOUT.”

Baker has vowed this team is something special — “They love each other and they hang together,” he said.

The Reds had dropped seven straight playoff games dating to 1995, when now-Nationals manager Davey Johnson and Cincinnati were swept in the NL championship series by Atlanta.

“I swear, I don’t know any of these numbers,” Baker said when it came up before the game. “You can’t do anything about the last 17 years, whatever it is.”

Latos began the third, working in relief for the first time since the minors, after pitching five innings Tuesday at St. Louis. While he had been set to go Game 3 on Tuesday in Cincinnati, the Reds said Cueto is day to day and certainly are hoping he’ll be ready later this series.

“He didn’t give us any sense of doubt he could do it,” Price said of Latos.

Posey homered to left leading off the sixth for San Francisco, drawing cheers of “M-V-P! M-V-P!” for the NL batting champion. It was his second career postseason home run and gave him a six-game postseason hitting streak dating to his 2010 Rookie of the Year season.

Cain was left to watch at that point, and he hardly looked happy visiting with manager Bruce Bochy in the dugout after being pulled before the bottom of the fifth for George Kontos.

But two of Cain’s five defeats this season were lopsided losses against the Reds — 9-2 and 5-0 — in which he allowed a total of four home runs, eight earned runs and 16 hits in 13 innings.

He had everything in his favor, pitching from the very mound where he tossed the first perfect game in franchise history June 13 against the Astros. He won his final six decisions of the regular season dating to a loss at St. Louis on Aug. 6.

Chapman put runners on first and second in the ninth and Baker paid him a visit. One out later he walked Marco Scutaro before the Giants scored on a wild pitch. Posey struck out to end it.

Now, the Reds hope to get Cueto back later this series.

The right-hander threw a second strike to No. 2 hitter Scutaro and walked off the mound in obvious pain. A trainer and Baker rushed out to check on him, and Cueto came out moments later.

He retired leadoff man Angel Pagan on a strikeout. During the at-bat, Pagan stepped out of the batter’s box and was granted time. Cueto apparently didn’t see it and continued his motion. But Baker said Cueto had felt some discomfort before the game and was alerted by Price.

He threw eight pitches and six strikes for the earliest postseason exit by a starter since Atlanta’s John Thomson lasted one-third of an inning in Game 3 of a 2004 NL division series against Houston. Thomson came out with a sore muscle in his left side.

“You hated to see anybody lose their starter, but they brought in a good one, too,” Bochy said.

NOTES: Bruce is .533 (8 for 15) lifetime vs. Cain. … San Francisco won Game 1 in each of its 2010 series — the division series against Atlanta, NLCS vs. Philadelphia and the World Series against the Rangers. … The franchises faced each other in the playoffs for the first time.