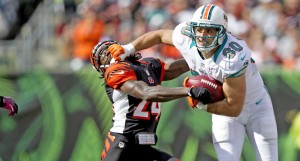 Cornerback Adam Jones (24) of the Bengals is pushed away by tight end Anthony Fasano of the Dolphins in the third quarter on Sunday at Paul Brown Stadium in Cincinnati. The Dolphins defeated the Bengals, 17-13. (MCT Direct Photo)

CINCINNATI (AP) — Andy Dalton didn’t have much time with the pass rush closing in. He saw Andrew Hawkins down the middle and tried to get the ball to him.

It sailed. It was picked off.

And for the first time, the Bengals left the field feeling they’d let one get away.

Miami’s Reshad Jones picked off Dalton’s pass at midfield with 1:22 left on Sunday, preserving a 17-13 victory that ended back-to-back weeks of heartbreak for Dolphins.

Miami (2-3) had led at halftime before losing to the New York Jets and Arizona in overtime. The Bengals (3-2) had a chance to add to their misery, but blew it.

“We let this one slip away,” receiver A.J. Green said. “We were just playing flat today. We didn’t help our defense at all.”

Cincinnati had a chance to get within a point with 3 minutes left, but Mike Nugent was wide right on a 42-yard field goal attempt, his first miss of the season. After the Dolphins ran down the clock and forced the Bengals to spend their timeouts, Cincinnati took over at its 20-yard line following a punt.

Dalton was under pressure when he sailed a pass intended for Hawkins, giving Jones an easy interception.

“I have to give it to the front line,” Jones said. “They got the pressure on the quarterback. I just needed to make a play.”

The Bengals never got anything going consistently on offense. Dalton was only 26 of 43 for 234 yards with two interceptions and three sacks against a defense that came in ranked No. 1 in the league against the run.

“We let a good opportunity get away from us today,” coach Marvin Lewis said. “There is no doubt in my mind about that.”

Miami had one advantage: Defensive coordinator Kevin Coyle was a Bengals assistant for the past 11 seasons and knew a few things about how their offense operates.

“He’s never had a problem motivating guys,” Bengals safety Chris Crocker said. “You’ll definitely play hard if you’re in one of his defenses. Their front seven really played a heck of a ballgame.”

So did their rookie quarterback.

The Bengals are in the midst of a stretch of five consecutive games against teams starting rookie or second-year quarterbacks. They’d won the first three by turning up the pressure — Cincinnati led the NFL in sacks coming into Sunday’s game.

They couldn’t rattle Tannehill, who was coming off his best game — 431 yards in the overtime loss at Arizona, the most ever by an NFL quarterback on the road. He followed it with a mistake-free showing.

Michael Johnson sacked Tannehill the first time he tried to throw, but the Bengals got to him only once more. Tannehill finished 17 of 26 for 223 yards without an interception. His passer rating of 92.3 was his best yet.

Tannehill completed passes of 15, 24 and 13 yards in a drive that led to Daniel Thomas’ 1-yard touchdown run that put the Dolphins ahead to stay 7-6 late in the first half. He avoided the rush and completed a 28-yard pass that set up Reggie Bush’s 13-yard touchdown run to start the third quarter.

It could have been even easier for the Dolphins. Fullback Jorvorskie Lane fumbled on a carry from the Cincinnati 11 in the first half.

Still, it was more than enough for a defense that contained the Dalton-to-Green passing combo. Green finished with nine catches for 65 yards, including a 2-yard touchdown.

Cincinnati had to settle for a pair of field goals in the first half, when Miami’s defense held on a first-and-goal from the 4-yard line.

“The offense didn’t play well across the board,” Dalton said. “It’s tough sitting here where we are. We had our chances, but we couldn’t get it done.”

Tackle Randy Starks reached up and picked off Dalton’s pass early in the second half, a two-handed grab as the ball reached the line. The interception set up the drive that ended in Bush’s 13-yard touchdown run.

NOTES: The Dolphins won without CB Richard Marshall, inactive after missing practice all week with a bad back. Nolan Carroll started in his place and left early in the third quarter to get evaluated for a concussion. … Bengals LB Rey Maualuga left for a concussion evaluation in the second half, but returned. … RB Bernard Scott had a 29-yard run in the first quarter, the longest allowed by the Dolphins this season. He hurt his left knee in the first half and didn’t return. … Cincinnati rushed for only 80 yards. The Dolphins haven’t allowed a 100-yard rusher for 19 consecutive games, its longest streak since 2002-03, when it went 20 games without allowing one.