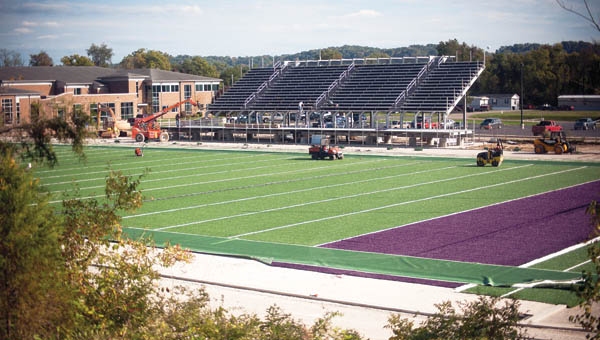 Motorists traveling along U.S. 52 in Chesapeake can view the future Chesapeake High School stadium. Workers construct the bleachers and put down astroturf.

CHESAPEAKE – With the Astroturf starting to cover the field of the new athletic complex at the Chesapeake school district, a group of parents and others in the community say they want to make sure the new field is the best it can be.

That’s the goal of the Panther Pavers Brick Campaign organized by the Chesapeake Athletic Boosters.

“This is to raise money to make this as nice a facility as possible and add any extras or put in anything that has been dropped from the budget,” Chuck Oldaker, treasurer of the boosters, said.

To do that the group is selling bricks that will go around the complex and can be engraved with individuals’ names and graphics.

“The idea is to create a walkway at the new athletic facility where people can leave their legacy,” Oldaker said. “Some of the pavers are in memory of loved ones who were avid Chesapeake supporters. A lot are buying for their kids because (the bricks) will be there permanently.”

A year ago in August the then Chesapeake Board of Education voted to demolish the aging football stadium and construct a football-soccer-track facility on the same site. MSA Sports of Cincinnati was chosen as the architects for the complex. That fall the board voted to move 2 mills from the district’s 4.5 inside millage used for operating expenses to permanent improvements. That was to fund part of the project.

The original project was to include a ticket booth, home and visitors bleachers on opposite sides of the stadium, and a separate locker and weight room. However, those plans were scaled back by the current board to keep the project within the $3 million cost the district had agreed to spend.

“The ticket booth has been in and out and we want to make sure this is a nice facility for the community and the kids,” Oldaker said.

The boosters have sold approximately 100 bricks so far, but want to increase that to 2,000.

On Saturday the group will have a booth at Chesapeake’s Octoberfest in Triangle Park and will be selling bricks there.

“We’ve been doing this for about a month,” Oldaker said. “We are just getting into high gear. We need to add some urgency. Our timeline is dependent on when the contractor is ready to build that final building and put in the concrete and pavers. We feel like we have two months.”

“It is an inch thick and you can display it in your office or home,” Oldaker said.

More information can be found at www.polarengraving.com/pantherpavers or by emailing at pantherpavers@yahoo.com.

CHESAPEAKE — Improving the look to the entrance of the Village of Chesapeake is the focus of the latest project... read more