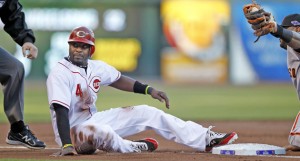 The Cincinnati Reds' Brandon Phillips (4) reacts after being tagged out at third base by the San Francisco Giants' Pablo Sandoval in the first inning in Game 3 of the National League Division Series at Great American Ballpark in Cincinnati on Tuesday. (MCT Direct Photo)

CINCINNATI (AP) — Hardly able to get a hit, the San Francisco Giants used a misplayed grounder to prolong their NL playoff series.

Third baseman Scott Rolen’s two-out error in the 10th inning gave the Giants the go-ahead run Tuesday night in a 2-1 victory over the Cincinnati Reds, who couldn’t shake 17 years of home postseason futility.

The Giants avoided a sweep in Game 3, cutting their division series deficit to 2-1.

“I’ve gone through the play many times in my mind between then and now, and I think I would play it the same way,” Rolen said. “It hit my glove. I just couldn’t get it to stick.”

The Giants managed only three hits against Homer Bailey and Reds relievers, but got two of them in the 10th — along with a passed ball by Ryan Hanigan — to pull it out. San Francisco won despite striking out 16 times.

“We kept scratching and clawing down two games to none,” reliever Jeremy Affeldt said. “That’s the way it is in the playoffs.”

Cincinnati finished with four hits, just one after the first inning.

Left-hander Barry Zito will pitch Game 4 on Wednesday for the Giants, who have won the last 11 times he started. The Reds have to decide whether to try ace Johnny Cueto, forced out of the opener in San Francisco on Saturday with spasms in his back and side.

Manager Dusty Baker said after the game that they hadn’t decided whether to let Cueto try it, bring back Mat Latos on short rest again, or replace Cueto with Mike Leake, who wasn’t on the division series roster.

Replacing Cueto would leave the Reds ace ineligible to pitch in the championship series should the Reds get that far.

“It’s very difficult, but it all depends on if your ace can’t go or whatever it is,” Baker said. “That’s part of the conversation — us going without him. We realize what’s at stake.”

The Reds haven’t won a home playoff game since 1995, the last time they reached the NL championship series. One win away from making it back there, they couldn’t beat a Giants team that has barely been able to get a hit.

Didn’t need many in this one.

Bailey made his first start at Great American Ball Park since his Sept. 28 no-hitter in Pittsburgh and allowed only one hit in seven innings, the latest dominating performance by a Reds starter. Marco Scutaro singled in the sixth for the only hit off Bailey.

Fortunately for the Giants, Bailey’s one lapse let to a run. He hit a batter, walked another and gave up a sacrifice fly by Angel Pagan in the third inning.

That was it until the 10th, with the Giants going down swinging — the Reds set a season high for strikeouts. Closer Aroldis Chapman got a pair of strikeouts on 100 mph fastballs during a perfect ninth inning, keeping it tied at 1.

San Francisco’s one-hit wonders finally got it going against Jonathan Broxton, who gave up leadoff singles by Buster Posey — the NL batting champion — and Hunter Pence, who pulled his left calf on a wild swing before getting his hit.

No sweep this time. Instead, a Reds team that lost a lot — closer Ryan Madson in spring training, top hitter Joey Votto for six weeks at midseason, Baker for the NL Central clincher, Cueto in the first inning of the first playoff game — ended up with another playoff loss at home.

Baker was back in the home dugout at Great American Ball Park on Tuesday for the first time in nearly a month, recovered from an irregular heartbeat and a mini-stroke. After a pregame ovation, he settled in his red folding chair with a toothpick on his lips.

The 63-year-old manager watched his pitching staff dominate again, but fail to get that breakthrough win.

Cincinnati hasn’t won a home playoff game since 1995, when the Reds beat the Dodgers 10-1 at Riverfront Stadium for a three-game division sweep. They then got swept by Atlanta.

The Reds’ next brush with the postseason came in 1999, when they lost a one-game playoff for the wild card to Al Leiter and the Mets. They finally made in 2010 with a young team that got no-hit by Roy Halladay and swept by the Phillies in the opening round.

The second-largest crowd in Great American history was still getting the hang of playoff rooting. A video board message instructed the 44,501 fans not to wave white rally towels while the Reds were in the field — could be distracting.

Didn’t take long to get those towels twirling. Brandon Phillips led off with a single, but was thrown out at third when he tried to advance on a ball that got away from Posey. It was costly — the Reds went on to score on a walk and a pair of singles, including Jay Bruce’s RBI hit to right.

The Reds got only one more hit the rest of the way.

NOTES: The game started 3 minutes late because a sign-waving fan ran onto the field. He was tackled by police in center field. … Giants avoided their third playoff sweep in franchise history. … The Giants haven’t lost three in a row since they dropped five straight from July 25-30. … Tom Browning, who pitched the Reds’ previous no-hitter — a perfect game against the Dodgers in 1988 — threw the ceremonial pitch. … Bailey fanned six in a row, matching the Reds’ postseason record. … The only larger crowd at GABP was for the 2010 playoff game against Philadelphia.

CINCINNATI (AP) — Homer Bailey turned in a pitching performance worthy of a series clincher. Too bad for the Cincinnati... read more