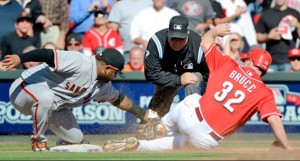 Cincinnati's Jay Bruce (32) is tagged out at third base during Thursday's decisive National League Division Series Game 5. San Francisco beat the Reds 6-4 for their third straight win and erased an 0-2 deficit. (Photo Courtesy of The Cincinnati Reds.com)

CINCINNATI (AP) — The Cincinnati Reds gave up a lot to get Mat Latos, hoping he’d push them to the next level.

Given his chance Thursday to do just that, he was gone in the fifth inning.

Ahead 2-0 in the series, the NL Central champion Reds lost the final three games at home. Cincinnati won 97 games during the regular season and took two more in the playoffs at San Francisco, but that 100th victory proved to be elusive.

Acquired in the offseason from San Diego for pitcher Edinson Volquez and three former high draft picks, Latos matched his career high in wins while going 14-4 this year. He then turned in four innings of one-run relief in Cincinnati’s 5-2 win at San Francisco in Game 1 after ace Johnny Cueto was injured in the first inning.

The duel between Latos and Matt Cain in the final game was scoreless when the Giants erupted for all of their runs in the fifth. Latos was charged with each of them.

Gregor Blanco led off with a single and scored on Brandon Crawford’s triple into the right-field corner. One out later, Crawford scored when drawn-in rookie shortstop Zack Cozart couldn’t handle Angel Pagan’s chopper behind the mound for an error.

Marco Scutaro walked, and Pablo Sandoval singled to load the bases, setting up Posey’s 434-foot slam off the facade of the second deck, right above Latos’s name on a narrow scoreboard.

The hit left the Reds in a hole that was nearly impossible to climb out of, Reds first baseman Joey Votto said.

“Buster Posey’s swing was a series-changer,” said Votto, who had two hits. “That made it very difficult to come back. You know they’re going to throw the kitchen sink at us.”

That was it for Latos, who gave up seven hits and six runs — five earned — with one walk and four strikeouts. Latos seemed to be distracted by a couple of calls he didn’t get from plate umpire Tom Hallion while walking Scutaro, but that wasn’t the pitcher’s only problem, manager Dusty Baker said

“What kind of got the inning going was — I don’t know if it was a ball or strike call that he lost on Marco Scutaro,” Baker said. “Then, after that, they started finding holes. That was a big hit that (Sandoval) got barely inside the shortstop. Then he had two strikes big time on a dangerous hitter who he had gotten out in Buster Posey. Plus, Buster’s hit into 19 double plays, and we were hoping to get another double play at that time, but the pitch wasn’t where he wanted it to be, and it wasn’t a double-play pitch.”

Baker thought about taking Latos out before he faced Posey.

“He was dealing, but yeah, there was consideration,” Baker said. “We discussed it, and he just made a couple of bad pitches and he still had plenty left in the tank. He still had two strikes on Posey. He just happened to throw one right down the middle.”

Outfielder Ryan Ludwick, who played with Latos in San Diego, hit a solo home run and an RBI single in the ninth. He didn’t mind seeing Latos on the mound to start the critical game.

“He’s a horse,” Ludwick said. “He’s a gamer. He’s full of intensity, and he’s going to be around this league a long time. He’s got good stuff, and he’s a competitor.”

Brandon Phillips hit a two-run double in the fifth inning, and Ludwick led off the sixth with his second homer in two games and third of the series.

Cincinnati had runners at first and second with one out in the ninth, but Jay Bruce flied out to left field on a 12-pitch at-bat that included 10 foul balls. Scott Rolen struck out against Sergio Romo, ending Cincinnati’s season.

The Reds left 11 runners on base, lifting their total to 28 in their three home games as they went 3 for 24 (.125) with one extra-base hit while batting with men in scoring position.

“We battled, but battling wasn’t enough,” Ludwick said. “The guys on the other side are human beings, too, and you’ve got to give them credit. We hadn’t lost three games in a row at home all year. They made good pitches with runners on base and kept us away from the big hit. This team lived and died all year with the big hit.”

Cincinnati lost three straight home games for the first time this season to complete an unprecedented playoff collapse, becoming the first team to lose an NLDS after winning the first two games. Since the NL added division series in 1995, the previous 21 teams to take 2-0 leads went on to win the series.

Cincinnati hasn’t won a playoff series since beating Los Angeles in the 1995 division series. The Reds were swept by Atlanta in that year’s championship series and by Philadelphia in a 2010 NLDS. They’ve lost six straight post(backslash)season home games, including all four at Great American Ball Park, which opened in 2003.

“You’ve got to work a little harder this winter and this is going to take a while to heal,” Baker said. “Sometimes, you get tired of the disappointments, but then you get over it. It hurts, big time. I’m a strong man, and usually I get over hurts and it makes me stronger when I come back.”

COLUMBUS (AP) — At least for a while, everyone will be talking about who’s not playing for Ohio State in... read more