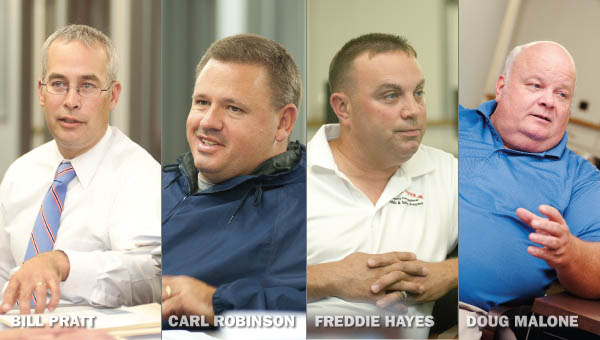 Recently The Tribune interviewed each contender individually asking him about his background, his interest in politics, and his views on issues currently facing the commission.

Whether they knew it or not at the time when the voters in the November 2010 general election cast their ballot for Paul Herrell for Lawrence County Commissioner, they were making history.

With that election the commission became an all-Republican body for the first time in at least 50 years with Herrell joining Jason Stephens and Les Boggs. Although only Boggs remains from the original group, the demographic is the same — three Republicans.

Now when voters go to the polls on Nov. 6, they can keep the status quo or change the makeup as two of those commission seats are up for grabs. Incumbents Freddie Hayes and Bill Pratt are facing opposition in November. Pratt is going against Carl Robinson and Hayes against Doug Malone.

Recently The Tribune interviewed each contender individually asking him about his background, his interest in politics, and his views on issues currently facing the commission: The county jail, the county budget, Memorial Hall and job creation.

Here are their answers:

Republican Bill Pratt of Chesapeake joined the commission in March of 2011 when he was appointed after the election of Jason Stephens, then commission president, to the Lawrence County Auditor’s office. A dairy farmer, Pratt’s previous political experience was serving part of a single term on the boards of education of the Chesapeake school district and Collins Career Center. Pratt is a 1991 graduate of Chesapeake High School and a 1995 graduate of The Ohio State University with a degree in animal dairy and poultry sciences.

“The jail is the biggest problem Lawrence County has as we don’t have the occupancy we need to house all the prisoners in the county. The issue is the cost. We have a jail. It doesn’t satisfy the state regulations for the space.

“My (funding) plan is (taking) half of the casino allotment (money the state is sending to the counties from the revenue of the four casinos in Ohio) over the next four years. That will amount to $2.25 million. Put that into a special fund designated for the renovation and addition to the jail.

“Buy the school board office by the Ironton City Schools. They want $350,000. That would come from part of the first half of casino revenue of next year to pay for that building. Then the next step is move EMS, EMA, coroner’s office and sheriff’s office, city and county health departments to that building. There everything is centralized into a true campus-style county government.

“Tear down the buildings that have housed those entities on Park Avenue with Community Development Block Grant money. Once you have that you have the footprint for the addition and renovation of the jail.

“Then we can start construction in about three years from now, 2015, and have it completed by December 2016. The jail will cost more than $2.25 million. If we have that initially funded, we can finance the rest, $6 million. We can make that payment with what we spend for out-of-county prisoners, $400,000. That is what we pay Scioto and Morrow counties to house those we can’t hold.

“The reason we need to put it into a fund and not start the project, the casino money is not a guarantee to see if we will get that money for the next three or four years. If we have the money to pay for the jail due to the savings for out of county prisoners, all we have to do is come up with the money for staffing, $400,000 a year for seven additional corrections officers.”

“We will end up with a carryover of $650,000. Our sales tax revenue is higher than we anticipated. That sales tax revenue has not been recertified. We are spending everything we appropriated plus an additional $400,000 in recertification. My idea is that a carryover should only be a month or so of revenue because we don’t collect taxes from taxpayers to build a war chest so to speak. Taxes are collected to provide a service and that is what we should do, not create this big wealth for the county.”

“Memorial Hall is not a viable option. We have not been able to acquire the grant we need to support that. We can provide the services at a much lower cost in a different facility.”

“We have to be able to market the county. The Lawrence Economic Development Corp. and the Chamber of Commerce have more equipment to do that. We can provide incentives through the port authorities to make a business friendly environment.”

Pratt’s opponent, Democrat Carl Robinson, is a 1991 graduate of Symmes Valley High School. His post-graduate education is two years at West Virginia Tech and an additional year at Ohio University Southern studying elementary education. He worked for two years at the Ohio Center for Youth as a childcare worker and 14 years at the Ohio River Valley Juvenile Correctional Center before the state shut the center down.

“We will have to have a new one. I know we have extra casino money. Maybe put it in a fund to guarantee growth, need to get with the sheriff. It is my expertise (as a corrections officer). I could be an asset. I don’t think a levy is the right answer. We couldn’t get a senior levy passed.”

“You want to be financially sound for the budget, not spend more money than you take in. Protect our people and make sure they are safe, make sure we fund all our departments. Anytime you can have a budget carryover, it is a good thing. We have priorities. We will have to have a new jail and senior center. Certain things that come up, you want to be ready for things that you don’t expect.”

“It is not viable at $3.2 million. That is not financially sound. If we can get grants, I am all about saving historical buildings. If we can get the price lower, it is something we can look at.”

“We have to have somebody to stand up to demand the resources and the respect from our state representatives and senators, to bring jobs to this county. We are kind of the forgotten county in Ohio. We have access to highways, great people. I will stand up and fight for this county, no matter what party our state representatives and senators are. We need resources from the state.

“The growth in this county ought to be countywide. As a commission we have to get together and work with every council, both industrial parks, every mayor. Together we would be a lot stronger than working apart.”

Republican Freddie Hayes of Scottown was appointed to the commission in April 2012 following the death of Commissioner Paul Herrell. Hayes is a 1992 graduate of Symmes Valley High School and went into his father’s produce business at the age of 18. He also went on the Lawrence Water Board, which he has managed for the past 12 years. Hayes also owns a number of Tri-State restaurants. Before joining the commission, Hayes was appointed to the Lawrence County Board of Elections in 2008.

“That is my No. 1 goal, to figure out getting a new jail. If we don’t, we will have a real problem in this county. I will work with the sheriff anyway we can to get that. We are going to have to figure out a way we can get the money. It is important. The jail we have holds 16 people. The crime rate is going up by leaps and bounds. We have to come up with a place to put them.”

“It is important to have a carryover. You never know what you have to come up to fund, special situations we had to fund with money from the carryover: (Lawrence County Municipal Judge Donald) Capper’s court roof to put on, some issues with the (Lawrence County) EMS. More money than we thought. Gas bills are rising. You have to have extra money for that. You never know how high it will be. Extra costs with the sheriff’s office due to crime, not because they spend it unwisely, because of the situation people are stealing.”

“I don’t have any problem with Memorial Hall. It would be good to be done for the veterans. But I don’t feel we are going to be able to afford to fund it. I am not against it being restored. I don’t see it as a feasible place for 911.”

“JobsOhio, we can work along with them, work along with (Dr. Bill) Dingus (of the LEDC) and his group to try to get people to The Point (industrial park), people in Ironton. We need to work with everybody. That is what keeps the county going.”

Democratic candidate Doug Malone will face Hayes in the November election. This will be the fourth time Malone has run for the commission seat. He held the post for eight years from 2002 to 2010, when he was defeated by Herrell. He is a 1971 graduate of Dawson-Bryant High School and has worked at Dayton Malleable as a timekeeper, a laborer at Semet Solvay Coke Plant, owner of a Stanley Steamer franchise and an insurance agent with Western-Southern Life. Besides his years on the county commission, Malone was Perry Township Clerk and Perry Township Trustee.

“We definitely need a new jail. The problem you have with a new jail is having enough money to fund the operation. Scioto County built a new jail the third year I was in office and they are in fiscal emergency. They didn’t have the money to operate that new jail. You have to have a way to pay for it. I don’t think it should be paid for by the property owners. I think there should be a different way to pay for these things. Operation is the key. I would target some of that casino money in that direction. I would not build a jail before I had the money to operate it.”

The eight years I was in office we made sure all the officeholders had what they needed for the year. We always finished in black and had a carryover. A carryover is so important to have. If you don’t, you don’t get your property taxes until middle of February. You need that for your first three months. We were always able to do that with help of the officeholders and the staff.

“I would have to see the numbers on it. What I heard is $7 million to revamp it. Do we have the money to mess with the older buildings? It would all come down to if it was financial, the right thing to do. I would be all for it. If it wasn’t, I wouldn’t be for it. You can’t spend the taxpayers’ money frivolously.”

“I am definitely for business. It all depends on the emissions put out, would EPA approve it. There are more particular here than in Kentucky. That stops growth. I have always been for jobs. An example is when the old hospital shut down and was sold, we had a meeting two weeks after I was elected. Our Lady of Bellefonte owned our hospital and they were not going to sell it back to us. We made up our minds to do our own thing. It took eight years. That little meeting brought St. Mary’s, the commissioners and the CAO to meet. In 2009, we took at $2.2 million loan. The commissioners bought the property, did all the groundwork. St. Mary’s paid our $2 million off, plus $27,000 in interest paid. Not one dime paid by the taxpayers. They employ 80 good jobs.”