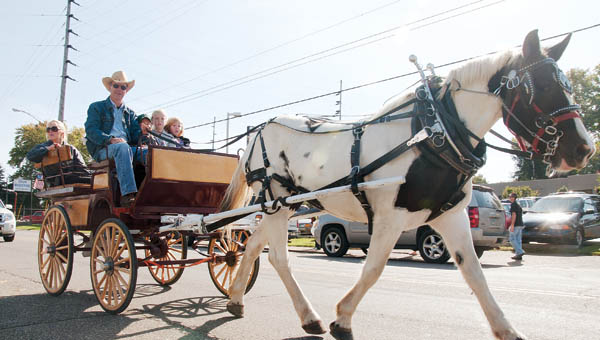 Mike Roach and Megan the horse make their way around Triangle Park giving carriage rides to people during the annual Chesapeake Octoberfest Saturday.

CHESAPEAKE — It was barely light outside when Dan and Rena Fulks began to set up their booth for the annual Chesapeake Octoberfest on Saturday.

By about 11 a.m., their duel cast iron kettles of brown beans were bubbling over the wood fires set up in the village’s Triangle Park.

For the past 15 years, the Fulks have faithfully attended Octoberfest, their brown beans and homemade cornbread in tow. The couple from Chesapeake also travels to other festivals in the Tri-State, usually each weekend starting in September through early November.

“You meet a lot of people you only get to see once a year,” Dan said of event. “And we get to work together.”

Dan pointed to his wife and, joining the couple this year, his granddaughter Janna Salyer.

The Fulks said they cooked about 50 pounds of beans, and that they usually sell out early each year.

At this year’s Oktoberfest, food was in no short supply, with church booths and various organizations selling homemade chili and baked goods, hotdogs, hamburgers and barbeque.

And to kick off the 17th annual festival, a 5K race and parade of local fire departments, the Chesapeake High School Marching Band and other groups.

Tammy and Mark Johnson brought their 5-year-old daughter Naomi to the event.

“It’s a pretty day and she wanted to come out to the parade,” Tammy said, while Naomi got a pumpkin painted on her face by a Chesapeake High School Choir member.

Mary Litchfield of Grace By Design was one of the crafters set up at the festival. She said she brings her custom hair accessories to the event each year.

“I love the parade,” Litchfield said. “I just love the atmosphere. There are a lot of church groups here. It is good, clean, family entertainment. And that is hard to find.”

Rain or shine, Litchfield said, people come in droves to the annual Octoberfest.

Luckily for children Liberty Sowards and Jessica Hoff, the weather was just right for a horse-drawn carriage ride around the park.

“I love that breeze,” Liberty said as Mike Roach steered his white horse Megan and carriage around the park.

“We’ll speed it up then,” Roach said as he urged Megan along.

Roach said he has attended the festival for about the past 12 years.

“I like kids,” he said. “I like working with them, listening to them laugh and carry on.”