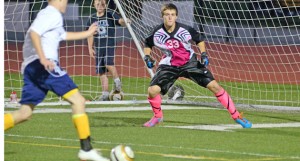 When the calendar reaches October, thoughts turn toward fall, Halloween and the colors black and orange.

But October has taken a new meaning and a new color for Justin Mahlmeister.

The St. Joseph Flyers’ senior is the team’s goalkeeper in soccer and goalie’s are dressed differently than the rest of the players due to his position.

Mahlmeister has been the goalie the past three seasons and he has chosen a different color scheme than other goalies. He has added a strong pink flavor to his attire.

A couple of years ago, St. Joseph student Natalie Wilson was diagnosed with Leukemia. The situation made Mahlmeister think about the various people within his own extended family who have been stricken with some form of cancer.

“Cancer affects anybody and it’s been in my family,” said Mahlmesiter.

“When she was diagnosed with Leukemia, I started (wearing pink) for her and I started thinking about others. I wanted to do it as a tribute to those battling cancer or who have beaten cancer or lost their battle with it.”

Some of the people within his family who have suffered with cancer are Audrey McGinnis, Helen Boll and Beth Weber.

“I’m not close with all my family members, but I am close with my aunt (McGinnis). I never really discussed this with any of them. I just did it,” he said.

Although Mahlmeister wears blue and orange cleats, he has taped the right shoe with pink tape. He also wears pink on his shirt, pink socks, pink wrist bands and wraps his shoelaces with pink tape.

“I didn’t ask anyone if I could do it. I just did it. My coaches were kind of impressed that I did it,” said Mahlmeister.

The pink attire has drawn the attention of opposing fans as well when the Flyers play an away game.

“People comment all the time. They say things like, ‘I’m glad you wear pink. You look good in pink. You care for other people. Oh, he’s wearing pink. That’s really cool.’ They see that you’re wearing pink to salute the whole breast cancer thing,” said Mahlmeister.

Besides soccer, Mahlmeister also plays basketball and baseball. He said he’s like to continue his tribute but he is aware that players must have similar uniforms in those sports.

“In basketball I usually try to wear a wrist band. Since I have pink socks, I’m going to talk to (basketball) referees or (baseball) umpires and see if that’s okay,” said Mahlmeister.

“I’ll probably put pink laces in my shoes because that’s something you can get away with pretty easy.”