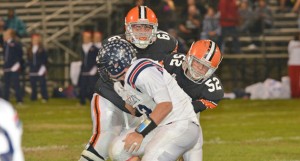 Ironton’s Jacob Friend (52) and Hunter Carmon (61) combine to make the stop on a Bishop Hartley running back. The Fighting Tigers play at Oak Hill on Friday. (Tony Shotsky of Southern Ohio Sports Photos)

Clint Eastwood once starred in a movie called “The Gauntlet.”

The Ironton Fighting Tigers must be starring in the sequel, only this gauntlet is known as their 2012 schedule.

Having faced Wheelersburg, Russell, Gallipolis, Ashland, Johnson Central, Bishop Watterson and Bishop Hartley, Ironton must play yet another tough opponent. The Fighting Tigers visit Oak Hill on Friday and the Oaks are 7-1 and leading Region 19 of Division V.

“They’ve got a nice team. They’re 7-1 for a reason,” said Ironton coach Mark Vass. “They’ve got some size and they come right at you. They’re physical and aggressive.”

The game marks the first-ever meeting between the schools. Ironton enters the game 5-3 following three straight losses. The Oaks are 7-1 and coming off a big 28-14 win over Symmes Valley.

Oak Hill’s only loss was 20-19 in triple overtime to Minford. The Falcons are 7-1 and are sitting third in the Division IV Region 15 playoff ratings behind Ironton.

“Their backs run hard and I like their quarterback. He’s a nice athlete and he has a good arm. He can throw the ball,” said Vass. ‘They’ve got a bunch of athletes to throw to.”

Oak Hill will mirror Ironton on the defensive side. The Oaks’ base defense is a 5-2.

“Teams usually play a 5-2 or a variation against our t-formation. That’s their base defense so they are more familiar with playing that system and that is to their advantage,” said Vass.

Anchoring the defense is Davis at the left linebacker spot. His running mate is Waugh.

Hammond and Harrison are the corners with Garrin Stiltner (5-9, 185) at one safety and Cox and Haislop splitting time at the other spot.