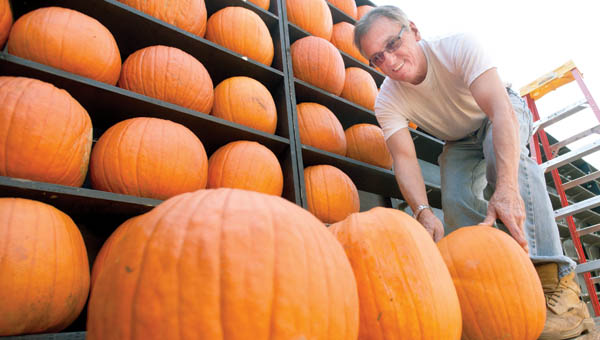 Pumpkin House originator Ric Griffith places pumpkins on his West Virginia wall as he starts creating for the upcoming pumpkin event at his home on Beech Street in Kenova, W.Va. Once the pumpkins are in place Griffith can start drawing his designs.

KENOVA, W.Va. –— The magic number is 50,000. That’s the goal of Ric Griffith, who for the past 30 years each Halloween has turned his home in Kenova into the Pumpkin House.

There at 748 Beech St., for about a week an average of 3,000 of the vegetables take over the front of his house and yard, each sporting carved faces ranging from cats to musical instruments to Egyptian symbols to the outline of the state of West Virginia complete with clouds and lightning bolts overhead.

When Griffith finishes drawing and jigsawing the designs for this year’s ensemble for the house, the total number of pumpkins that have been part of the display since he started the event in 1978 will reach that five-digit figure.

“I started with four pumpkins, two for my girls, my wife and myself,” Griffith said.

As Griffith’s family increased to three daughters, the pumpkins did as well, although more than exponentially.

Last year the total number of pumpkins that have graced Griffith’s Kenova house since 1978 reached 46,628. After this Halloween, that number will swell to 50 K, give or take a few whose life span is shaky.

“I never know exactly where there will be casualties,” he said. “When these pumpkins go bad, they infect the others. We don’t want the bubonic plague.”

The Pumpkin House will start burning with visual delight earlier this year starting on Saturday Oct. 27 to complement the autumn festival, held jointly by the town of Ceredo and the city of Kenova that day.

“The residents there have pulled together for the festival,” said Griffith, who also wears the hat of Kenova mayor. “It is not a festival of either city government. It is dispersed between the communities with some activities at the Ceredo Plaza, activities at Dreamland Pool and at the C-K War Memorial Field house.”

On opening night at the Pumpkin House John Marra, television gardening expert, will read “The Legend of Sleepy Hollow.” On Oct. 30 radio personality J.B. Miller will be the narrator and on Oct. 31 local television anchor April Kaull will read the Washington Irving short story. Readings on all three nights will be at 7:30 p.m. 8 p.m. and 8:30 p.m.

Tolerating what Griffith calls his obsession is his wife, Sandi, who once called out to her husband in the early morning hours as he was cutting in designs, “If you carve them, they will come.”

And each year they have as the crowds have grown to the tens of thousands.

“She dreads the long hours I work, and the mess, but she loves it when it is done,” Griffith said. “She enjoys the people and the kids.”

With the U.S. Supreme Court ruling in favor of early voting in Ohio the three days before the election, the... read more