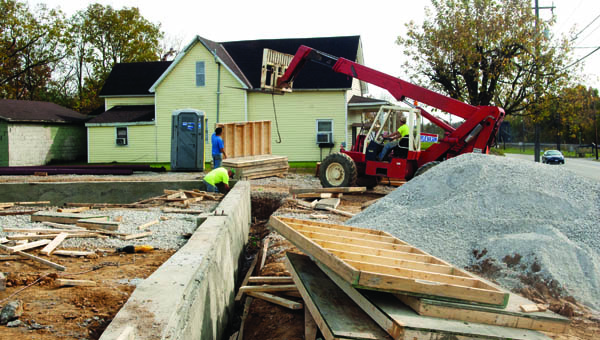 M&M Inflatables is adding a 3,600 square-foot party center for private parties at its location on South Third Street in Ironton.

Mick Clark sees the expansion of his business, M&M Inflatables, as a way to meet a need in the area.

Last week, the Ironton-based business began construction of a 3,600-square-foot structure beside its existing location on South Third Street. The new building will be what Clark calls the party center, something his customers have been asking for.

“We have a need for it,” Clark said. “Our customers have been asking for the last nine years.”

Clark said he expected the building to go up this week and the project to be completed by the third week of November.

The expansion is an effort to keep business steady in winter months, Clark said. M&M, which offers large inflatable bounce houses, slides and other party gear, is a popular go-to in warm months for birthday parties, church and community events.

Clark estimated his business does about 6,000 events per year, but with the addition of the party center, he said he hopes to make his business year-round, not just seasonal.

Starting at $135 for two hours, the party center will host a private themed party with three inflatables, a hostess, full kitchenette, restrooms, arcade games, access to party supplies, and even a DJ and limo service to the venue if requested.

“Anything we can think of, we can do for them,” Clark said.

Clark said reservations are already being accepted. To reserve the party center or for more information, call M&M Inflatables at (740) 534-1796.