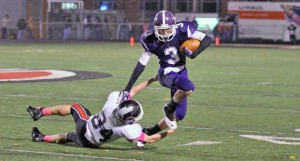 Don’t think for one minute that the Coal Grove Hornets will suffer any kind of a letdown.

After beating Fairland and Chesapeake the past two weeks to clinch at least a share of the Ohio Valley Conference title, the Hornets could easily relax against the young Pointers (1-8, 1-3).

But Coal Grove (5-3, 4-0) still has an outside chance at the postseason playoffs as well as winning the league title outright.

South Point has its own young group of players led by D’Angelo Palladino and Gage Townson, but the Hornets’ offensive and defensive lines have been dominating against OVC team.

It’s been a long, weary season of travel for Chesapeake.

The new football/track complex is near completion but the Panthers will be on the road for the 10th straight week.

Chesapeake (4-5, 3-1) is looking for a win to finish the season at .500 overall and secure second place in the conference outright.

Rock Hill (1-8, 1-3) has struggled with injuries and inexperience all season, but the Redmen offense has been improving.

Rock Hill has just two seniors which should mean a lot of returning experienced players next year.

Fairland has the distinction of playing River Valley in its final football game as a member of the Ohio Valley Conference.

River Valley (2-7, 1-3) will join the Tri-Valley Conference next year.

The game will match the running game of the Dragons’ Tyree Ceasar and Nathan Campbell against the Raiders Kyle Brown.

This will be a matchup of two top small-school area teams from different states.

The Vikings (7-2) are looking for a win to keep their hopes of a home playoff game alive.

Buffalo (7-1) comes into the game ranked No. 7 in Class A in West Virginia.

The Bisons feature quarterback Levi Jordan who is 54 of 102 for 1,212 yards and 16 touchdowns. He has just four interceptions.

All-purpose back Laythem Good has rushed 83 times for 512 yards and 8 touchdowns and he has caught 21 passes for 511 yards and 5 scores.

Garison Erwin has 17 receptions for 307 yards and four TDs.

My cousin from Ireland — Paddy O’Furniture — stopped by the other day to visit and he had a good... read more