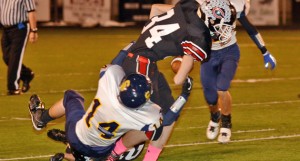 COAL GROVE — The Coal Grove Hornets racked up 466 total yards of offense and won their second straight outright Ohio Valley Conference championship with a 54-10 rout of the South Point Pointers on Friday.

Quarterback Alex Bare was 4 of 8 passing for 60 yards and ran 7 times for 69 yards and two touchdowns. He also returned a fumble for a score.

WILLOW WOOD — Quinton Bare returned a short field goal attempt to the Buffalo 30-yard line and D.J. Miller then ran 2 yards for a touchdown with 35 seconds to play as the Symmes Valley Vikings rallied to beat the Buffalo (W.Va.) Bisons 21-20 on Friday.

Symmes Valley (8-2) held on downs when a Buffalo 34-yard field goal attempt went high into the air. Bare grabbed the ball and made his return. Tyler Rowe threw a 20-yard pass to Austin Owens that set up Miller’s touchdown and Tyler Ferguson kicked the decisive extra point.

Buffalo (7-2) took a 13-0 lead on a 69-yard touchdown pass from Levi Jordan to Laythem Good and a 1-yard scoring run by Jordan.

BIDWELL — Nathan Campbell and Tyree Ceasar both ran for 100 yards as the Fairland Dragons cruised to a 47-19 win over the River Valley Raiders in an Ohio Valley Conference game on Friday.

Quarterback Chance Short was 10 of 16 passing for 204 yards and two touchdowns.

Kyle Sowards caught four passes for 112 yards and at TD while Cody Midkiff had two catches for 29 yards and a score.

The game was the final OVC contest for River Valley (2-8, 1-4) who leaves for the Tri-Valley Conference next year.

An inverted cross and the numbers 666 are spray-painted on the floor of the historic Macedonia Missionary Baptist Church located... read more