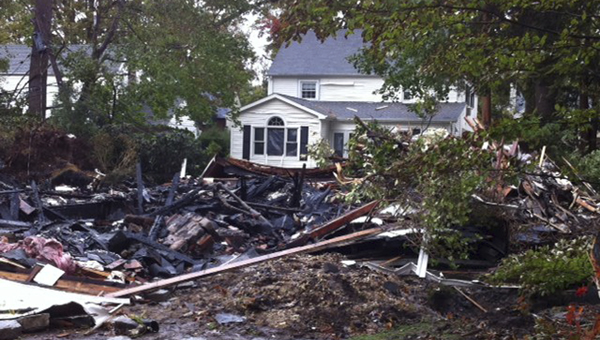 A house on Kenwood Road in Garden City, New York, is leveled to the ground from an explosion in the aftermath of the superstorm Sandy, Tuesday, October 30, 2012. Neighbors rescued a 97-year old man inside.

(MCT) —  More than 200 patients were being evacuated from two Manhattan hospitals late Monday after backup power systems failed in the wake of Sandy, a massive storm that roared ashore in New Jersey, swamping New York, killing at least 12 people and wreaking havoc across a huge swath of the Northeast.

The backup generator failed at NYU Langone Medical Center, New York Mayor Michael R. Bloomberg said. Nearly 50 of the patients were described as “critical” and were being taken to the Mount Sinai Medical Center. A second New York facility, Bellevue Hospital Center, had a similar problem and had to evacuate, the New York Fire Department said. 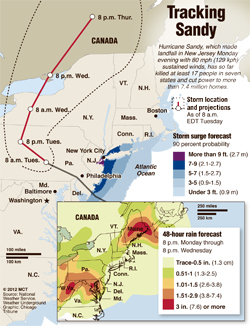 Chaos pervaded a wide area of the East. The U.S. Nuclear Regulatory Commission declared an alert at the Oyster Creek nuclear power plant in New Jersey after floodwater rose 6 feet above sea level. The plant powers more than half a million homes but was already out of service for a previously scheduled refueling. The water was expected to recede, and the alert was the second-lowest of the NRC’s four “action levels.”

According to official accounts and media reports, falling trees killed an 8-year-old boy in Franklin Township, Penn., and a 62-year-old man in Boytertown, Penn. Authorities said a firefighter in Easton, Conn., was killed in the line of duty, but they did not release details.

Falling trees also killed people in the New York borough of Queens; in the community of Roslyn on Long Island; in Mendham Township and Hawthorne, N.J.; and in Mansfield, Conn. A woman died in a storm-related car crash in Maryland, and in Toronto, a woman was killed by a falling sign.

Earlier Monday in North Carolina, a replica of an iconic British transport vessel sank in churning seas, killing at least one crew member. The HMS Bounty, built for the 1962 Marlon Brando film “Mutiny on the Bounty,” was featured in several other films and welcomed by large crowds at numerous ports. It was en route to St. Petersburg, Fla., when it began to take on water southeast of Cape Hatteras, N.C.

One crew member’s body was recovered and 15 others were rescued by Coast Guard helicopters. The 63-year-old captain was still missing.

The storm’s center crashed ashore a little after 8 p.m. EDT, delivering a powerful blow to the most populous region of the United States, paralyzing epicenters of power and commerce and plunging smaller coastal communities into crisis. More than 3 million homes and businesses, including the lower third of Manhattan, were without power.

Shortly before midnight, Sandy was near Philadelphia, moving northwest at 18 mph and carrying sustained winds of 75 mph, according to the National Weather Service.

Turbulent days lay ahead: In New Jersey, the Hudson River had invaded Hoboken. In West Virginia and Maryland, a blizzard was under way. In New York, water poured into subway tunnels and the World Trade Center site; exploding transformers lighted up the dreary sky and 300 calls to 911 flooded in each minute. Bloomberg said downed power lines had sparked numerous fires.

“These are not games,” Bloomberg said. “Things have gotten tough. But we’re going to get through this together.”

Sandy’s center passed over land just south of Atlantic City, N.J., but the precise landfall site didn’t matter. Sandy was a freak event _ a late-season hurricane hemmed in by weather bands, gobbling up the energy of the Gulf Stream while growing into a ragged, 1,000-mile-wide storm.

By the time it came ashore, authorities had changed Sandy’s formal description from a hurricane to a “post-tropical cyclone,” a non-tropical weather event. The scientific distinctions seemed lost on the storm. As Sandy grew, so did its power to push a wall of sea water onto shore _ with such force that some rivers were expected to run backward.

The result was a plodding ogre of a storm, powerful more because of its scope than its sheer strength. The metropolitan areas of Philadelphia, Baltimore and New York were most immediately in the cross hairs, but Sandy cast tropical-storm-strength winds from the Carolinas to Maine. Hurricane-force winds stretched from Virginia to Massachusetts.

Because of its size, Sandy was more than a coastal event. Officials predicted 33-foot waves in Lake Michigan and high winds in Indiana. In Ohio, high winds were predicted to generate 20-foot waves on Lake Erie, posing a flood risk. There were formal government warnings of one variety or another in 23 states, and 60 million people _ nearly 1 in 5 Americans _ could weather the storm before the end of the week.

The storm’s impact was so varied and widespread that Maryland Gov. Martin O’Malley called his state “America’s weather in miniature.” Maryland was being pounded on both ends of the state. There were blizzard warnings to the west, with some areas expected to receive as much as 2 feet of snow, and flood warnings for the area around Chesapeake Bay, with storm surges as high as 4 feet forecast for Tuesday.

“This is going to be a long night,” O’Malley said.

The normally by-the-book National Weather Service delivered this message to those who were resisting calls to evacuate: “THINK ABOUT YOUR LOVED ONES. … THINK ABOUT THE RESCUE/RECOVERY TEAMS WHO WILL RESCUE YOU IF YOU ARE INJURED OR RECOVER YOUR REMAINS IF YOU DO NOT SURVIVE.”

Landfall came with darkness, the last flickers of daylight revealing one ominous image after another: firefighters in Long Island wading through 3 feet of water to get to a house fully engulfed in flames; chunks of the fabled Atlantic City boardwalk, the oldest in America, floating past avenues whose names are on the Monopoly board _ Pacific, Ventnor, Atlantic.

White-capped waves barked at the marble-stepped foot of the Jefferson Memorial in Washington and splashed over park benches at Stuyvesant Cove Park near New York City’s East Village. A portion of Wall Street was under water, and fire stations in New York and New Jersey were being evacuated _ one, in Manhattan, by boat. The floor of the New York Stock Exchange, Times Square, the monuments on the National Mall in Washington _ all were deserted.

Those snapshots portended a week of misery in the Northeast, federal authorities warned. The storm was expected to stall near Philadelphia, and then curl slowly toward the north and east _ strafing Pennsylvania on Tuesday, New York state on Wednesday, New England and Canada on Friday and Saturday.

After a storm surge as high as 12 feet battered coastal areas, freshwater flooding was expected to wash over pockets of the Northeast. The tale of the next few days will likely be water, water everywhere _ from the sky as rain, hail and snow; from the ocean, surging in rivers and back bays with nowhere to go. Power outages could linger for days.

“This is a long-duration event,” said Rick Knabb, director of the National Hurricane Center in Miami.

The federal government announced that its offices would be closed again on Tuesday, and analysts warned that damage could top $10 billion.

In Midtown Manhattan, a crane attached to a luxury high-rise called One57 partially collapsed, and was dangling 1,000 feet above West 57th Street. One57 is scheduled to be New York City’s tallest building with residences; its penthouse sold last spring for $90 million. By Monday night, pieces of the crane began smashing some of the windows, sprinkling glass onto the street and forcing the evacuation of a nearby hotel.

“With the winds as they are, we cannot secure it,” Bloomberg said.

Hundreds of thousands of people had evacuated their homes _ and many had declined.

With her apartment key dangling on a lanyard around her neck, Venus Jones Johnson trudged through a driving rain to a shelter at West Philadelphia High School in Pennsylvania. Johnson, 45, lives alone in a rented room.

“I kept hearing about this big disaster headed our way, so I figured I should find a better place,” said Johnson, her winter coat slick with rain.

Darryl Bradley, 44, said he had tried to stick it out at home last summer during Hurricane Irene, which killed more than 50 people _ and collapsed part of Bradley’s ceiling.

“They say this one is going to be much bigger and much worse, and last a lot longer,” Bradley said after arriving at the shelter. “I barely survived Irene, so I’m not trying that again.”

Not everyone wanted to go. In New York, a small but steady stream of gawkers could not resist watching the harbor rise around them. At the waterfront in Brooklyn’s Red Hook neighborhood, Nicholas Martin sipped coffee and watched the water rippling in _ up the side of a brick warehouse, around a telephone pole.

“I don’t think the flood is really going to get all the way to our apartment,” Martin said hopefully, and a bit tentatively. Down the street, three people could be seen throwing suitcases into the back of a pickup truck and driving off.

In Philadelphia, Cain Carducci was remarkably calm, considering he lives on a pier over the rapidly rising water of the Delaware River. Carducci, 23, planned to ride out the storm in his condominium.

“I am getting a little concerned now,” Carducci said, as the water pitched and roared below. “But I’m staying.”

Sandy also wreaked havoc with the nation’s busiest airspace. Airlines canceled more than 8,900 flights Sunday and Monday, and another 4,800 for Tuesday. Philadelphia International Airport, La Guardia Airport and Newark Liberty International Airport were hit particularly hard, and authorities warned that delays and cancellations could linger until early next week. Travel snarls were expected to ripple around the world.

The storm derailed the presidential campaign just a week before the election, postponing early voting in some areas and causing President Barack Obama and Republican presidential nominee Mitt Romney to cancel campaign events. The president backed out of a scheduled rally in Orlando, Fla., to return to the White House situation room. He could be seen wincing into the wind and rain as he stepped onto the tarmac at Andrews Air Force Base in Maryland.

“This is going to be a big and powerful storm,” Obama said. “Millions of people are going to be affected. … I am not worrying at this point about the impact on elections. Right now, our No. 1 priority is to make sure we are saving lives.”

Politics will come soon enough. Top officials at the Department of Homeland Security were receiving an unusual volume of calls from members of Congress eager to get their constituents reimbursed for storm damage and rescue efforts, according to an administration official who was not authorized to speak to the media. If the storm stays on its current track, it is projected to hit more than 168 congressional districts, the official said.

In New York, Broadway was closed Monday _ including scheduled performances of “Annie,” Chicago” and “Evita” _ and most theaters will be closed on Tuesday as well. Performances at the Metropolitan Opera, Carnegie Hall and the Public Theater were canceled. Many of the country’s noted museums also closed _ the Metropolitan Museum of Art and the Museum of Modern Art in New York, the Smithsonian in Washington, the Philadelphia Museum of Art.

Production on New York-based television shows and feature films was interrupted _ none more ironically than Russell Crowe’s “Noah,” a film about the biblical flood. Writer-director Darren Aronofsky’s production team had built two massive ships. One of them, a 450-foot-long “ark,” was docked in a small inlet on Long Island Sound, where one in 10 homes was without power four hours ahead of landfall.

Several talk shows also canceled production, including “The Colbert Report,” “The Daily Show with Jon Stewart” and “Jimmy Kimmel Live,” which usually films in Los Angeles but had been scheduled to begin a week of heavily publicized shows from Brooklyn, Kimmel’s home borough.

Hunters team up, help each other

WINDSOR TOWNSHIP — Twenty-year-old Addie York of Tennessee got to see something veteran sportsman and hunter Buddy Fry has... read more