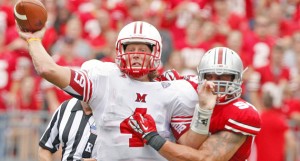 COLUMBUS (AP) — Most will rest. Some will try to heal. Others will try to catch up on classwork or a personal life.

A bye week is a time to take a breath for the fifth-ranked Ohio State Buckeyes.

There are also a few who will pause, knowing there are only two games left in their college careers.

“It just hit me in the locker room,” senior defensive lineman John Simon said Saturday after Ohio State rolled Illinois 52-22. “It goes extremely fast. The seniors, we’re making every moment count. We’re trying to make this season a memorable one.”

It already has been. But it could be even more memorable.

Despite a glittering start (10-0, 6-0 Big Ten) to their season, what remains will determine whether Urban Meyer’s first Ohio State team is an unqualified success or one that wilted when it got close to its biggest goals.

The most difficult games on the schedule await.

After taking a couple of extra days off this week (they’ll still have full-tilt practices on Tuesday, Wednesday and Thursday), the Buckeyes begin to prep for the showdown at Wisconsin on Nov. 17 and at home against archrival Michigan a week later.

“I need the off week. I’m still battling injuries. Any extra time I can use to rest,” cornerback Bradley Roby said. “The bye week is going to give us a little more time for our academic situations and things like that. It’s coming at a good time even though it took a while to get here.”

Meyer said the week will come in handy because Ohio State just moved from quarters to semesters, which has changed the academic calendar for the players. He said several players had told him the string of 10 straight games and adapting to semesters has been like “hitting a wall.”

“We can unhit the wall for a week academically, get that in order,” he said. “Get their weights up and bodies right. You get (a bye) usually week six, seven. (I’ve) never had 10 weeks straight through.”

Ohio State will likely regain starting linebacker Etienne Sabino, who has missed the last four games after cracking a bone in his lower right leg. Almost every Buckeye who plays much has a litany of bumps and bruises, with defensive backs Orhian Johnson, Roby and Christian Bryant in particular hoping to get back to something approaching full health.

The coaches, meanwhile, will pound the pavement (or airways) doing some in-season recruiting.

Still, the upcoming tests will never be far from everyone’s mind.

“Going to Wisconsin, it’s not going to be an easy game,” safety C.J. Barnett said. “I’ve never been over there — I was hurt my sophomore year — but I heard it’s a hostile environment. They have a great running back (in Montee Ball) who can run the ball, great coaches. It’s going to be a tough one but I think we can do it.”

Carlos Hyde, who has become one of the top backs in the Big Ten, has solidified the tailback slot and taken some of the heat off of quarterback Braxton Miller, who was saddled with having to make almost every big play for the Buckeyes early in the season.

Hyde, who has 144 carries for 737 yards and 13 touchdowns in a breakout season, is pleased with Ohio State’s lofty ranking. Sort of.

For Roby, now is a good time to think about everything that’s been done — and also everything left to do.

“It’s hard to win 10 games in a row and that’s what we accomplished,” he said. “Right now, it’s a grind. The whole season is a grind. We’re going to keep getting better and keep winning. Coach Meyer has given us some time off during the bye week so we can get healthy.

CINCINNATI (AP) — The Bengals are back on oh-so-familiar ground, caught in the deep slump that threatens their season at... read more