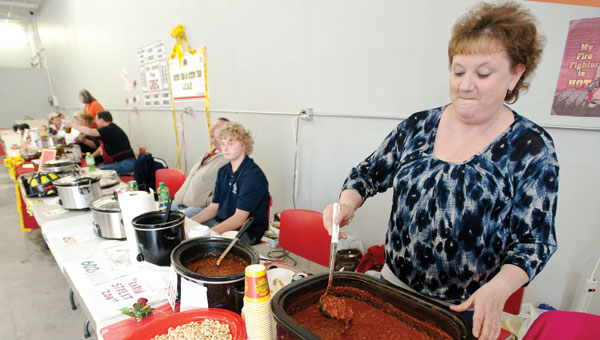 UPPER TOWNSHIP — A couple of local volunteer fire departments are a little closer to reaching their fundraising goal, thanks to some ambitous chefs and some eager tasters.

The event featured 12 chili entries and a host of community members supporting the event by sampling the cold-weather fare.

Coal Grove Fire Chief Gary Sherman said the event brought in about $574 for the two departments.

“It went way better than I thought it would,” Sherman said of the first chili event. “I had hoped for 10 (entries) so that’s better than what I thought. I’m just hoping for it to be twice as big next time.”

“We had a pretty good turn out,” she said. “Not too bad for our first year.”

The People’s Choice winner of the cook-off was called “Jail Break Chili” by the Cook ‘Em and Book ‘Em team from the Lawrence County Sheriff’s Office. The chili was prepared by deputies Jay and Julia Jones.

Deputy Carol Kitts was also on the team. She said she hoped the event will grow next year, and that it was fun to support an event hosted by the fire departments. They also enjoyed spending time with the firefighters outside of an emergency situation.

“We work with them almost every shift,” Kitts said.

“We should be able to buy the break bars that go on the ropes,” Pancake said.

Pancake said his department has ropes, but no other equipment to aid in a cliff rescue.

As for the chili cook-off, Pancake said there would be another next year.

“We’ll definitely try it again next year,” he said. “It turned out bigger than what we had planned on. We hope to make it bigger and better next year.”