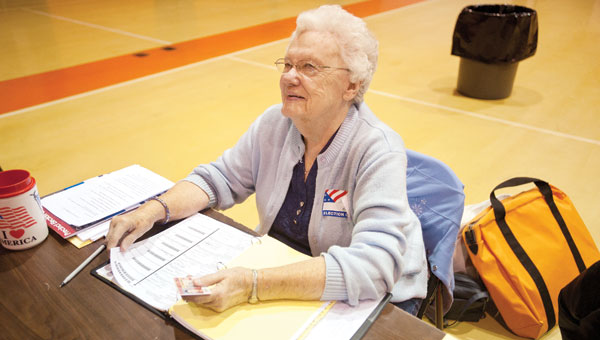 Freda Rose Holmes checks voter identification while working the section 3E of the precinct voting station Tuesday morning in the Conley Center at Ironton High School. Poll workers said that turnout had been low compared to the past but believed it was due to a record number of voters taking advantage of early voting options.

Huge. That’s the word Cathy Overbeck used to describe the early voter turnout in Lawrence County this year. Overbeck, director of the county’s Board of Elections, said Monday that the turnout was the largest she has seen in her 16 years at the office.

“It’s the biggest we’ve ever seen in this county,” Overbeck said.

Elections board member Mark McCown estimated about 7,000 votes had been cast.

“We processed 6,500 on Sunday,” McCown said. “Since then we have had a couple hundred vote. I do not know what they have processed in the mail today (Monday).”

Each year, 35 days prior to Election Day, the State of Ohio allows registered voters to vote by absentee ballots, either by mail or in person.

Although voters are showing up to the courthouse prior to Election Day to cast their votes, Overbeck said it is still considered absentee voting.

“Early voting is when you vote early and it counts when you vote,” Overbeck said. “These are absentee ballots. People are coming in and voting instead of getting them to their house and delivered by the mail. They don’t get counted until (Election Day), just like always.”

Although the early voting may cut down on the lines at the polls today, Overbeck said the process makes it difficult for the board of elections to prepare for Election Day.

“It is very difficult for us to actually get ready for Election Day when we can’t do anything. When we are on overload,” Overbeck said.

McCown said board members are hopeful this year’s Election Day is less hectic than in years past.

“Certainly there are some headaches that are caused by (early voting) because there is last minute scrambling we have to do to get the poll books in order for Election Day,” McCown said. “Because, obviously people that voted at 2:30 p.m. today (Monday), we want to make sure they don’t try to vote again. But by the same token, we’ve taken some measures as a board and as a staff to try and alleviate that. Rather than waiting until Election Day to process some of the things, we’ve started that earlier this year so that it won’t be as stressful on Election Day.”

And for those who are at the courthouse after the polls close at 7:30 p.m., a video monitor will be set up on the second floor to display updated election results as the board of elections tabulates the ballots.

The board members usually hand out printed reports of the tallies, which they will still do, McCown said, but the live video feed will be the most up-to-date way to keep track of results.

“The secretary of state has mandated that we report to them every half hour beginning at 8 p.m.,” McCown said.

That also means precinct-by-precinct tallies will not be available on election night.

“With the mandated reports to the secretary of state there is no mechanism to get the precinct-by-precinct breakdown without exiting out of the entire tabulation system,” McCown said.

On election night, the very first tally displayed live will include all absentee and early votes from all 84 precincts, McCown said.

Leah Harmon, representing the Coal Grove Fire Department, stirs up her chili during the cook-off Saturday at the Upper Township... read more