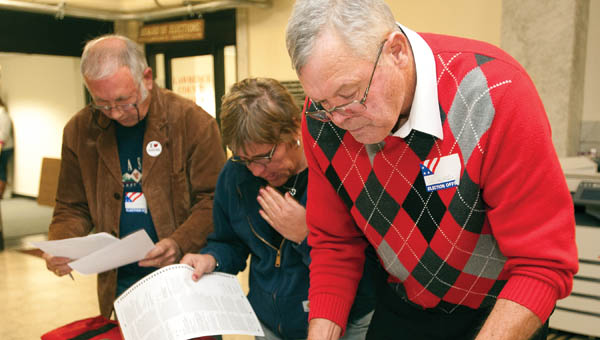 Election 2012 was a series of firsts for the Lawrence County Board of Elections and board officials give the office top marks.

“The staff worked extremely hard and kept up with all of the demands and all the changes,” Craig Allen, elections board chair, said on Wednesday.

This summer Ohio’s Secretary of State Jon Husted sent out mass mailings of absentee ballot applications to all registered voters in the state resulting in a record turnout of voting. Lawrence County was no exception as 51.79 percent of the 49,759 registered voters came to the polls either on or before Tuesday.

Also for this election President Obama supporters filed and won a lawsuit against Husted’s office seeking early voting the last three days before the Tuesday general election. That brought lines into the Lawrence County Courthouse on days the building is normally closed.

Another innovation was in the way the board distributed election results to those waiting in the courthouse. In the past, staff would pass out Xeroxed copies of the results every 10 precincts or so to the crowd on the first floor.

“When the returns come in, you can’t make copies fast enough,” Allen said.

Tuesday night election results were transmitted via streaming to a screen on the second floor, precinct by precinct.

“It wasn’t hard for us to do thanks to Mark (McCown on the elections board),” Allen said. “He took care of all the technical part. It eliminated a lot of the crowd in the basement. We could put the results out where everybody could see them.”

Next time McCown expects to transmit the streaming either through video monitors or a real projection screene.

“This was a first run at it to see if it would work on election night,” McCown said. “We will get better at it.”

Working on the election were the four full-time staff members and four part-time workers who came in about two months ago to get ready for the vote.

“They worked extremely hard,” Allen said. “We went non stop for long days. I thought it was a masterful job.”

Next on the election boards’ agenda will be the official count starting at 8 a.m. Nov. 17 where 720 provisional ballots will be counted.

“You have to remember that our permanent staff at the board consists of four individuals,” McCown said. “We are putting on an election with temporary staff and poll workers — 385 people are required to make it work. All those people have to be trained leading up to it. Our permanent staff was wonderful. It is a massive undertaking. People don’t realize what has to be done to pull it off.”