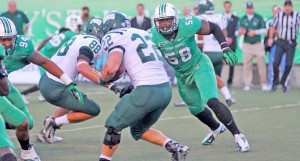 South Point — For any Tri-State Youth Football League player, the ultimate goal for their team is to play in the “Turf Bowl” at Marshall’s Joan C. Edwards Stadium.

For the South Point Pointers B-Team, that goal will be realized for a second year in a row.

However, after practice on Thursday, the South Point B-Team got to meet a special guest that calls “The Joan” home.

“I told them to go out and have fun. Coach Holliday talks to us about the importance of having fun when we play, and I told them to play for each other, have fun, and bring home the win,” Taylor said.

South Point (8-1) will play at 1 p.m. on Saturday in a rematch from last year’s championship with the C-K Wonders (8-1) where the Pointers won the first championship for the South Point Youth Football League in over a decade.

“It’s great to see them get the opportunity to play there, and it’s too bad that I am not going to get to be there to watch them play Saturday. It is something special and I am definitely proud of these guys,” Taylor said.

Taylor and the rest of the Thundering Herd football team will be on the road Saturday at the University of Alabama-Birmingham in a Conference USA matchup.

South Point is not the only Lawrence County team to make it to Saturday’s championships, as the Chesapeake Youth Football League will also have three teams in the “Turf Bowl.” The Panthers D-Team will start the day’s championship games around 10:00 AM against the DC Express from Huntington with the E-Team to immediately follow.

The Chesapeake C-Team will play against the C-K Wonders at around noon and support a 9-1 record coming into the game.

Chesapeake has three teams in the title game for the first time in league history.

This will also be the first time a Chesapeake team has played in the Turf Bowl two years in a row.

A public pep assembly will be held at 2 p.m. Friday at Chesapeake Elmentary.