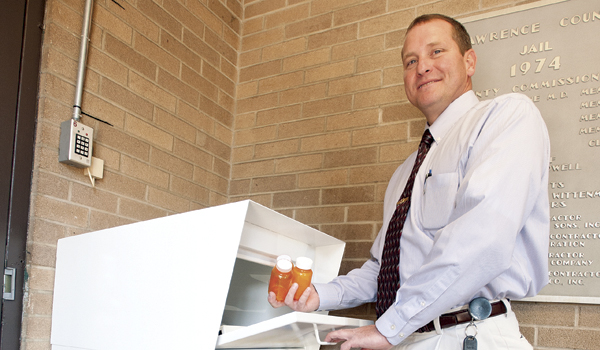 Lawrence County Sheriff Jeff Lawless is seen disposing pill bottles of the new drug take back box for prescription drugs in the lobby of the sheriff’s office.

It’s about the size of a mailbox — just don’t put your outgoing letters in it.

The Lawrence County Sheriff’s Office installed a new drug take-back box Wednesday, ready to be filled with old prescription medications. The Hanging Rock Police Department was also issued a box, which will be installed soon.

Sheriff Jeff Lawless said his office put in a request to the Ohio Attorney General last year for the box, but did not receive one.

“Some were awarded back then but we did not get one,” Lawless said. “The opportunity came up again so we applied again.”

“Reports we filed with the state, with the DEA, has helped to show we are active about keeping the stuff off the street and out of the waterways.”

The sheriff’s office and Lawrence-Scioto Waste Management District offers drug take-back events throughout the year, but the box provides a safe way for citizens to dispose of unwanted prescription medications 24 hours a day.

The use of the box, located in the lobby of the sheriff’s office, requires no interaction with a law enforcement officer. If a person has drugs they want to dispose of, they simply have to walk into the lobby and dispose of the drugs into the secure box.

Several safety precautions should be observed when using the take back box:

• Do not deposit needles or sharp objects.

• Liquids should be tightly capped and placed in a zip lock bag.

• If a label can be removed, do so. If not, black out the name with a marker.

All medications and containers that the sheriff’s office receives will be incinerated.

“This is a much needed tool in our efforts to rid our streets of drugs,” said Lawless. “All too often people become targets of drug addicts because they have prescription medications in their homes. This is a safe way to dispose of medicine and I hope that everyone takes advantage of it.”

Sheriff continues quest to get more funding for office

Calls the situation desperate   Any more layoffs at the sheriff’s office could mean a county without a jail. And... read more