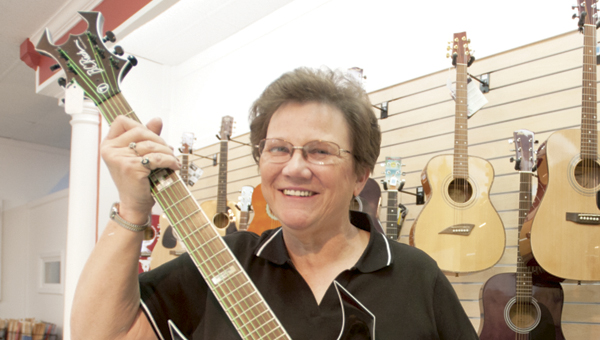 From as small as a guitar pick to as large as a 6-foot-tall upright bass, nothing is off limits at Dick’s Music Shop.

How about a tenor saxophone and a beginner’s guide to jazz improv? Done.

For more than 50 years, Dick’s Music Shop has been a fixture in Ironton, and according to Mollett, the business shows no signs of slowing down.

As of Nov. 2, the music shop has relocated to 119 S. Third St., right in the mix of downtown in the former Glitters dress shop.

Mollett, who acquired the shop about four years ago from the now late Dick Rice, said sales have been gradually increasing and the business was outgrowing its space.

“We’ve done very well,” she said. “The Tri-State, Ironton especially, has been very good to us.”

Sheet music sales are way up, Mollett said, and music lessons have increased. The new location, more than double in size, has five rooms for lessons, versus the single room at the shop’s former location.

Mollett said customers from all around frequent her shop, from Portsmouth and Minford, to Louisa and Grayson, Ky.

“We’ve got the best prices on strings you’ll find anywhere,” she said. “And the only violin accessories section you’ll find.”

The new location also has a small stage. Mollett said she wants to start an open mic night on Thursdays for music students who want to jam together.

“The kids we’ve talked to are really excited about it,” she said.

As for the journey so far, Mollett said owning the music shop has been everything she wanted it to be.