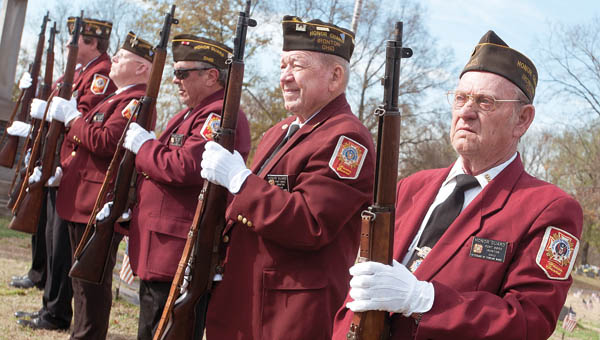 The men of VFW Post 8850, in their maroon jackets and traditional hats, stood as a stark contrast to the lightly-clouded blue skies Sunday during the annual Woodland Cemetery Veterans Day Ceremony.

Patriotism and community pride were on full display in the Soldiers’ Plot at Woodland that was lined with American flags on the graves of Lawrence County’s fallen servicemen and women.

Demi Sands, an 11-year-old student from Ironton Elementary, followed the Pledge of Allegiance with a rendition of the National Anthem that garnered rousing applause from the more than 50 people who came out to honor our nation’s veterans.

“It makes me feel very blessed to be able to sing for them, to sing the National Anthem,” Sands said. “I was honored to do that.”

Lt. Col. (Ret.) Scott Evans, former commander of the Ohio National Guard 216th Engineer Batallion who was awarded the Bronze Star for leading his soldiers in Iraq, spoke about the history of Veterans Day and the county’s patriotism.

The country can proudly claim it has 20 million veterans, Evans said. More than 3 million have been injured and more than 1 million paid the ultimate price by sacrificing their lives.

Evans said that Lawrence Countians have responded to the call of duty at a higher rate than Ohio’s average or even the national average in every conflict since our country was founded.

“Lawrence County has a long, proud tradition of patriotism,” Evans said. It goes back to the Civil War and beyond. “We were steadfast in our support of what was then called the experiment of democracy, Evans said.” We remain so today.”

Evans praised the Ohio National Guard’s 216th Engineer Batallion, especially company B that was made up of men and women from Lawrence and Scioto counties.

“I cannot tell you enough about their bravery, their patriotism and the ability to accomplish any mission,” Evans said. “The impossible became the standard expectation.”

Evans talked about the history of the holiday that has become Veterans Day. It began as Armistice Day, which was celebrated on the 11th hour of the 11th day of the 11th month to mark the end of World War I in 1918.

“Take this day to honor those who stood for us and pledge we will never forget them,” Evans said.

For 76-year-old Gerald T. McGuire, the ceremony was an emotional and fitting one. The man served 25 years in the U.S. Army including two tours in Vietnam.

“It gives you a chill, at least it does for me, when you salute the flag and hear them sing the National Anthem,” he said. “I am proud of our community, of Lawrence County and of our country.”

Even with the personal sacrifices and the high cost that many veterans pay, McGuire said he has no regrets about answering the call of duty.

“I would do it all over again,” he said. “America is the best country in the world. Even with our problems, we are still the best.”

WASHINGTON — Congress returns to the nation’s capital next week with hopes of a big deal but strong odds favoring... read more