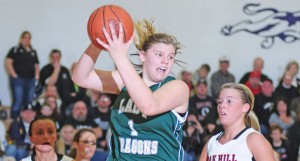 Fairland Lady Dragons’ 6-foot-4 junior center Terra Stapleton has given a verbal commitment to play at the University of Minnesota, a member of the Big Ten conference. (Kent Sanborn of Southern Ohio Sports Photos)

When all the people got together and began to talk, the 6-foot-4 junior Stapleton was offered a scholarship to play for the Lady Gophers. Stapleton made her visit and gave a verbal commitment to be part of Minnesota’s 2014 class.

“Right from the start, Minnesota showed a strong interest and commitment,” said Stapleton who wanted to play in the Big Ten Conference.

“I visited Minnesota and fell in love with the campus, coaching staff, atmosphere and city. I felt at home and it felt right.”

The series of events began when Minnesota assistant coach Curtis Lloyd was talking to Tom Jenkins who operates Ohio Girls Basketball Report. Lloyd said the Gophers needed a strong center and Jenkins was quick to supply the name of the Lady Dragons standout.

“A lot of people have asked ‘Why a verbal now?’ Why not wait?’ If I have already found the perfect school for me, why would I wait,” said Stapleton

It is easy to see why Stapleton drew Minnesota’s interest.

Stapleton averaged 21.1 points and 13.4 rebounds a game last season. She was named the Southeast District Division III Player of the Year and was named first team All-Ohio.

Her accomplishments helped lead the Lady Dragons to their first-ever 20-0 regular season. Fairland advanced to the regional tournament for only the second time in school history.

Even though there are two years left until graduation and the certainty that plenty of colleges will try to persuade Stapleton to change her mind, she appears to be “rock solid” in her commitment.

“Yes, most definitely (Minnesota) is the school for me,” said Stapleton. “The Big Ten and their physical type play was the best fit. I have been to several other schools but none of them could offer what Minnesota did. I feel very confident that Minnesota can help me accomplish all the goals I have set for myself.”

Browns want Weeden to cut down on interceptions