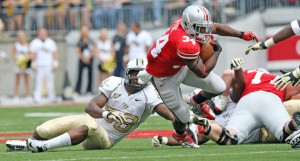 COLUMBUS — Forget all the white noise surrounding the Ohio State-Wisconsin showdown on Saturday.

If the Badgers can run the ball at will — and the Buckeyes are unable to stop them — it’s game, set, match.

“Their strength is their run game and their power game and that’s what they do best,” Ohio State defensive end John Simon said. “It’s our job to stop that. If we can stop the run, that’ll be big for us.”

Wisconsin’s rushing attack is built on a talented offensive line, an unshakeable self-assurance in their ability to move the chains, some odd personnel alignments and human projectiles named Montee Ball, James White and Curt Phillips.

Ohio State, thanks to 1,000-yard quarterback Braxton Miller and blossoming sophomore Carlos Hyde, averages more yards on the ground per game — 256 to 219.

But the Badgers passed just seven times in their last game, a 62-14 beatdown of Indiana in which they rushed for 564 yards.

In that game, Ball ran for 198 yards on 27 carries, White had 161 on 14, Melvin Gordon went for 96 on just eight attempts and Phillips, a third-string quarterback forced to take over as starter because of injuries, rushed for 68 yards on only seven carries.

Ball, in particular, has been a beast as the season has progressed. He was at his very best against the intimidated Hoosiers.

“He even had to club a ref on one occasion on Saturday to get where he needed to be,” Wisconsin coach Bret Bielema said. “He was just running angry. He was out of his mind. It was unbelievable. He and James (White) just complement each other so well.”

Bottom line: Running the ball is what Wisconsin loves to do.

But the Buckeyes, 16th in the nation against the run while allowing 108 yards a game, take a lot of pride in putting the brakes on powerful attacks.

“We’re built to stop the power and the run,” defensive tackle Johnathan Hankins said. “That’s what we do and that’s what we’ve been known for around here. I feel like that’s going to come pretty easy for us.”

Ball needs just two touchdowns — against Ohio State, at Penn State in the regular-season finale, in the Big Ten championship and a bowl game — to become the leading touchdown scorer in FBS history. Miami University’s Travis Prentice holds the record with 78.

“If he gets it in the LAST game of the season, I won’t be mad at him,” Ohio State safety Orhian Johnson cracked.

Ohio State has worked very hard this week on filling gaps and making the tackle when they do encounter a ball-carrier.

Adding to the workload is Wisconsin’s penchant for using quirky alignments. In their “barge” set, the Badgers put as many as six offensive linemen and two tight ends on the field, use a direct snap to a back, and dare the defense to figure it all out in a matter of seconds.

“It looks crazy, it looks illegal,” Buckeyes safety Bradley Roby said. “I didn’t know you could do that. We’ve simulated that in practice. Just seeing it is kind of funny.”

Coach Urban Meyer said his defense has spent all week gearing up to stop the Badgers’ steady advance on the ground.

It’s the unpredictable that causes the most concern for Ohio State’s staff.

“It’s crazy the formations you see,” Meyer said. “There’s, I want to say, six (linemen) on one side and two on the other one time. That’s fine if you get lined up. If you don’t get lined up, you get embarrassed.”

Ball expects the Buckeyes’ best. And he expects Meyer to preach to his players to not let Ball get the TD record before a roaring home crowd with Ohio State’s perfect season hanging in the balance.

Ohio State linebacker Zach Boren was asked if it was scary looking at video of how Wisconsin trampled Indiana, gaining at least 10 yards on 20 plays and at least 20 on seven.

“I wouldn’t really say scary, but they’re a great offense,” he said. “They’re known for just keeping on going and going and breaking one or a couple. They’ve got the offensive line to do it, they’ve got the running backs to do it. We have to play a perfect game on Saturday and we’re going to try and do that.”