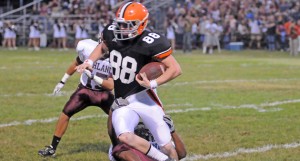 Aaron Stephens doesn’t mind switching from his orange and black uniform to blue and white.

The Ironton Fighting Tigers’ senior two-way end and long-snapper is one of 90 senior recruits selected from a pool of 4,200 candidates to play for the North squad in the Blue-Grey National All-Star Game on Friday, Dec. 21, at Raymond James Stadium in Tampa, Fla., home of the Tampa Bay Buccaneers.

“They sent me a letter to congratulate me and then the director called me and went more in-depth,” said Stephens. “There are some pretty nice players in the game. There are five or six from Ohio. They’re from all over the country and they’re all good athletes.

“To be one of the best defensive players selected was an honor. I feel I really earned it. I had one of my best days and put up good numbers. I competed the best out of everyone at my position.”

The game will be at 8 p.m. and streamed live and also on tape delay by Fox Sports Florida “Prep Zone” to the entire country.

The 6-foot-3, 210-pound Stephens was chosen from the Midwest combine held at the Cincinnati Bengals’ Paul Brown Stadium.

“Aaron is an outstanding player and leader. He did a great job for us and he’s very worthy of this honor,” said Ironton coach Mark Vass.

Players are selected from the Super Combine to form a North-South team to play in the Blue-Grey All-Star Game.

Stephens — a two-year starter for Ironton — was a first team selection on the Associated Press All-Southeast District team. He was also named the Division IV Defensive Player of the Year as he averaged seven tackles a game with five quarterback sacks and five deflected passes.

Offensively, Stephens led the team with 16 receptions for 240 yards and three touchdowns.

Last summer Stephens was rated as the No. 15 long-snapper nationally by the Ray Guy Kicking Camp that tests players throughout the entire country.

Aaron Stephens’ invitation to the national Blue/Grey National High School All-Star Game carries an expense fee of approximately $3,500. Anyone interested in helping to sponsor his trip and living expenses at the all-star game may make a contribution to Citizen’s Deposit Bank until Nov. 30.