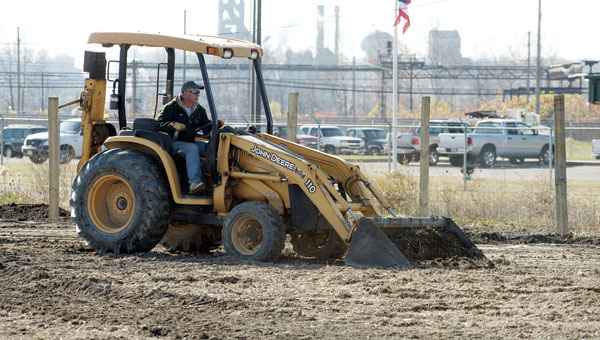 Volunteers were bundled up against Saturday morning’s cold as they drove fence posts and put up boarding at the new horse arena at the South Ironton Industrial Park.

The new arena is a project of the Lawrence County Horseman’s Association, whose goal is to expand tourism in Ironton by bringing in more horse enthusiasts to the area.

Previously, the association used the arenas at the Ohio Horse Park of Ohio University Southern. Now, as they build their own arena, the association’s goal is to add more shows and more classifications to tap into the horse industry.

“If we can bring those horsemen to town, it will improve the economy,” Flint Adkins, spokesman for the association, said.

Adkins competes monthly at shows in other cities in the state and sees competitors from Texas, Georgia, Nebraska, Ontario and New York there.

“If they can come to Jackson, why can’t they come to Ironton,” he said. “This is a great location.”

Expected completion date for the 128-foot by 280-foot arena is April 1. For a while the arena will be exclusively outdoor. But the organization has plans to build an enclosed facility as well.

Volunteers have been working for about a week and have one-third of the first phase of the project completed.

“We want to get other associations to hold shows here as well,” Adkins said. “We do western and English and want to try to broaden our horizons where we can have gaited horse shows, cow horse shows and ranch types.”

Right now there are about 60 members of the association, that is open to new members. Dues are $25 for a family and $10 for grandparents. Anyone interested can find more information on Facebook or by contacting Adkins at 740-516-3170. The organization meets the first Thursday of each month at the VFW Post 8850 in Ironton at 7 p.m.

Adkins admits the new location may be transitory.

“If a plant wants to come in here and bring 200 jobs, we will pack up and leave,” Adkins said. “But we are not using any taxpayers money and hopefully, we can do some good.”

Blood drive to benefit Ironton man, others   Five years ago, Tom Brose had some lab work done at his... read more