Many upset Buckeyes have no bowl to reward season 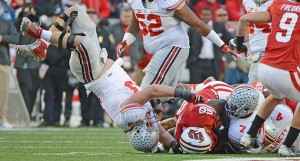 Ohio State Buckeyes defensive lineman Garrett Goebel (53) flips over after stopping Wisconsin Badgers running back Montee Ball (28). Goebel is one of many Buckeyes unhappy they will not be allowed to play in a bowl this season. (MCT Direct Photos)

COLUMBUS (AP) — Any other year Ohio State is unbeaten and ranked No. 4 coming into its annual rivalry game with Michigan, its fans would be trolling the internet for the best airfares to the BCS title game.

Due to NCAA sanctions, Ohio State is banned from playing for the Big Ten championship next week and going to a bowl, and isn’t a factor in the national title picture.

So a wondrous and surprising season — 11-0 heading into Saturday’s home game with the 20th-ranked Wolverines — will come to an abrupt and premature end on Saturday.

Many of the faithful blame athletic director Gene Smith, who gambled and lost that the NCAA wouldn’t levy a bowl ban.

Letters to the editor in the local newspaper, calls to sports talk shows and posts on fan websites all spew vitriol at Smith, who had served on the NCAA’s committee on infractions and believed the penalties he and Ohio State’s administrators had proposed would be sufficient to appease the ruling body of intercollegiate sports.

“At the time we made the decision we felt confident that we would not receive the bowl ban,” Smith said on Tuesday. “Obviously, when we received it we were shocked and devastated.”

The sanctions stem from former coach Jim Tressel learning in April 2010 that several players had likely received free tattoos and cash from the subject of a federal drug investigation. NCAA rules require coaches to notify the association or their superiors when they have any information that violations may have taken place, including improper benefits to athletes. Also, Tressel’s contract clearly specified that he was required to report any hint of wrongdoing.

Yet he didn’t tell anyone. It was only after the Buckeyes had completed a 12-1 record, won the Big Ten and the Sugar Bowl, that investigators looking into another matter came across incriminating emails which proved that Tressel had knowledge of potential violations.

Tressel was forced to resign in late May 2011. Ohio State officials worked closely with the NCAA in a lengthy investigation that also turned up evidence of other violations.

In July, roughly a month before Ohio State’s hearing before the NCAA’s committee on infractions, Smith said he believed the self-imposed sanctions, which included vacating the 2010 season, returning bowl money, five-game suspensions for several players, NCAA probation and recruiting limitations, would be enough to mollify the NCAA.

He said there would be no bowl ban “unless something new arises.”

That proved to be prophetic. On the eve of the opening game of the 2011 season, with defensive assistant Luke Fickell taking over as interim coach, three players were suspended for each accepting $200 in cash from a booster at a charity event.

Midway through the season, several more players were found to have been paid too much for summer jobs. Starting wide receiver DeVier Posey would end up sitting out 10 games due to violations.

By late October of a mediocre season, of course, Ohio State taking itself out of a bowl wouldn’t have carried a whole lot of weight with the NCAA.

When final sanctions were announced shortly before Christmas, a month after Urban Meyer had been hired as coach, they included the 2012 bowl ban.

The NCAA does not explain its rulings. But it stands to reason that the violations which came to light after Ohio State’s hearing may have resulted in stiffer penalties.

“I don’t know what (the NCAA was) thinking. I appreciate the question, but you’re asking me to project what they were thinking. And I can’t,” Smith said. “I still don’t think our case overall deserved the bowl ban.

Meyer and the Buckeyes had some fits and starts but have won every game this season. Should they beat Michigan, it would mark only the sixth unbeaten and untied season in Ohio State’s 123 years of football.

Fans look at the Buckeyes’ trip a year ago to the Gator Bowl — where they lost to Florida, 24-17, to complete a dreary 6-7 season — and wish Smith and Ohio State would have sacrificed that postseason trip to prevent losing the one this year.

Now, one of only two unbeaten teams left in all of major-college football, Ohio State is resigned to sitting at home after its last regular-season game.

Jim Lachey, an All-American lineman for the Buckeyes 1981-84, is now a radio analyst of Ohio State games.

“I don’t know if anybody ever in the modern era of football dreams about going undefeated and not going somewhere. But that’s the price we pay,” he said. “It’s going to be weird after that Michigan game.”

A large segment of fans remain angry at Smith, who declined to reveal how much negative feedback he has received.

“I know it’s difficult to move on when we’re having so much success, but the reality is that there’s nothing at this point in time that anyone at this institution can do about that,” he said.

Ohio State will be commemorating the 10th anniversary of its 2002 national championship team during Saturday’s game.

The coach of that team was Tressel. Almost everyone expects him to receive a cordial welcome from a crowd of more than 105,000 — even though he is the principal culprit in why the current team cannot also play for a national title.

Smith, who is 56 and has been at Ohio State since 2005, said he is not contemplating retirement. He still enjoys the job and believes he is making a difference.

Ohio State, although not listed in the BCS rankings because of its NCAA sanctions, is a longshot to still win an Associated Press national title if it is the nation’s only unbeaten team.

If the Buckeyes can’t win it all, Smith will quietly pull for his alma mater. He was a four-year letterman as a defensive end for Notre Dame when it won the 1973 AP national championship.

Smith has no regrets about decisions that were made during the NCAA deliberations. He stressed again that he has moved on.

“There’s no doubt that people should have the feelings that they have relative to the bowl ban,” he said. “Of course. But there’s other people who understand the reality of what we’re dealing with and that we have to focus on what is in front of us. There’s certain things that we can’t change.

Rutgers leaves Big East for $$ in the Big Ten

PISCATAWAY, N.J. (AP) — Rutgers is joining the Big Ten, leaving the Big East behind and cashing in on the... read more