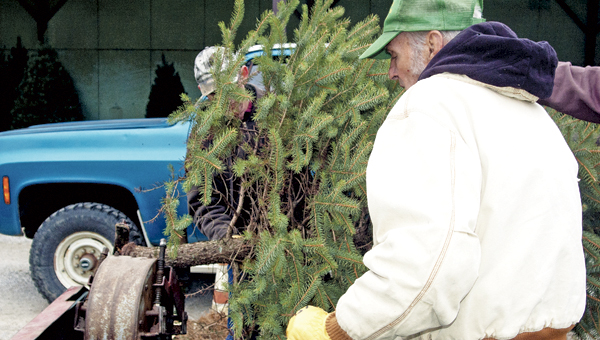 Charlie Delong helps shake debris from the Hammonds’ freshly cut Christmas tree before it is tied to their car.

ANDIS — A few snowflakes were falling as the Hammond family waited for their fresh spruce tree to be cut down Saturday.

For Bill Hammond, the 10-year-old tree will be the first live Christmas tree he has had in a long while, and the first ever in the Hammond household in Franklin Furnace since the children came along.

“We’ve never been here before,” Bill said as he and his wife, Dana, waited for their tree at the tree farm.

Dana said she decided this was the year to go traditional with a real tree. She found the farm through a Google search.

“It feels old fashioned,” Dana said. “… It should be fun getting it into a tree stand since we’ve never done it before.”

More than just a decorative plant, the live Christmas tree would add a little sincerity to the holiday season, Bill said.

“Christmas is quite artificial anymore,” he said. “… I’m glad to buy a real tree. This is really what Christmas is all about.”

This is the 36th year for the K. Dickess Christmas Tree Farm out on County Road 61 in Andis. Keith Lee Dickess, Jr., is the owner, after taking over the business from his father, Keith, Sr. about 10 years ago.

Black Friday was a big day for the farm, Dickess said.

“It was a much larger day than we’ve ever had on Black Friday,” he said. “It was surprising.”

The farm opened for layaways earlier this month. Dickess said in the first few weekends in November, about 100 trees were claimed by families preparing for the Christmas season.

The farm opened for daily sales on Black Friday, where about 100 more trees were claimed or cut.

Joe Unger, 21, and his little sister Laiken, 9, came out to the farm Saturday to pick up the tree his family picked out earlier in the month.

“It’s fun coming out here,” Unger said. “It’s been a tradition that the Unger family does every year.”

Unger said his father, Joe Unger of Unger’s Shoes in Ironton, has told him stories about his father and his father’s brother-in-law picking out and taking home five or six trees for the whole family.

The Washington family from Chesapeake chose their Christmas tree Saturday.

Walking through the cluster of firs, patriarch Glen said the family has come to the farm each year since 2009.

“We like coming out here,” he said. “It’s nice to get a fresh tree. We have resisted buying an artificial tree. It means Christmas to us to have a live tree.”

Glen’s two sons, Pat and John, walked through the rows.

“That one looks more full,” Pat said, pointing at a plump tree.

“But which one can we put more ornaments on?” said Mary, matriarch of the family.

The Washingtons tagged their tree for a later pick-up date, like many families.

“As soon as you walk into a room with a fresh cut tree, the smell is amazing,” he said.

Proctorville man faces 51 counts involving juvenile females   A jury will is scheduled to be seated in Lawrence County... read more