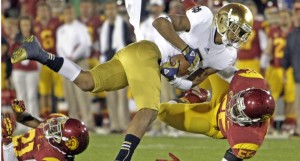 Notre Dame wide receiver T.J. Jones hangs on to a pass against USC linebacker Lamar Dawson (55) in the first half at the Los Angeles Coliseum on Saturday in Los Angeles, Calif. The Irish won 22-13 to finish 12-0 and earn a berth in the BCS championship game. (MCT Direct Photo)

Theo Riddick rushed for 146 yards and a touchdown, Kyle Brindza kicked five field goals, and No. 1 Notre Dame secured a spot in the BCS championship game with a 22-13 victory over Southern California on Saturday night.

Everett Golson passed for 217 yards as the Irish (12-0) completed their first perfect regular season since 1988, earning a trip to south Florida on Jan. 7 to play for the storied program’s first national title in 24 years.

Although they did little with flash on an electric night at the Coliseum, the Irish woke up more echoes of past Notre Dame greats with a grinding effort in this dynamic intersectional rivalry with USC (7-5), which has lost four of five.

Notre Dame’s hard-nosed defense appropriately made the decisive stand in the final minutes, keeping USC out of the end zone on four plays from the Irish 1 with 2:33 to play.

“Well, that’s who we are,” Notre Dame coach Brian Kelly said. “It’s been our defense all year. Our offense is able to manage enough points.”

After spending more than a decade looking up at the Trojans, the Irish are back on top of this rivalry with two straight wins in Los Angeles. The school of Knute Rockne, the Four Horsemen and Paul Hornung has new heroes now, from inspirational linebacker Manti Te’o to Kelly, who took the Irish from unranked to start the season to No. 1 in the AP Top 25 for the first time in 19 years.

Te’o, the Heisman Trophy hopeful, had a key interception against USC and became the second Irish defender with three 100-tackle seasons — and he took particular pride in that last defensive stand, which included three straight Trojans runs resulting in nothing.

“It doesn’t matter where the ball is,” Te’o said. “We’re going to protect the end zone at all costs.”

But after USC failed on three straight runs at a defense that has allowed just 11 rushing TDs in 30 games, Wittek threw incomplete to fullback Soma Vainuku, setting off a leaping, chest-bumping celebration on the Notre Dame sideline and in the Irish sections of the sold-out Coliseum.

“They’ve had a great goal-line defense all year,” USC coach Lane Kiffin said. “They’ve done that to everybody down on the goal line. … It’s just so hard to score touchdowns versus them. When the ball is on the 2-inch line, you’d think you could score touchdowns.”

The grind-it-out win highlighted an unforgettable season for the Irish, who began the year with questions about their relevancy and survived some uninspiring performances and nail-biting finishes with their unbeaten record intact.

Notre Dame is likely to face an Southeastern Conference opponent in Miami, but won’t know for another week which one. Alabama and Georgia play for the SSEC title in Atlanta.

With the Irish offense repeatedly stalling in the red zone against the Trojans, Brindza went five for six on field goals, even hitting a 52-yarder at the halftime gun.

Wittek passed for 186 yards with two interceptions in his first career start for the Trojans, who completed their tumble from the preseason No. 1 ranking with four losses in five games in an enormously disappointing season. Wittek filled in capably for injured Matt Barkley, but USC is headed to a lower-tier bowl in the first year after its NCAA-mandated two-year postseason ban ended.

Barkley watched from the sideline in a grey hoodie with a sling on his right arm after spraining his shoulder in last week’s loss at UCLA. The senior and Pac-12 career passing leader won twice in South Bend during his career, but never got to face the Irish at the Coliseum, sidelined by injuries for both visits.

Barkley still ran down the Coliseum tunnel with the rest of the USC seniors for their final home game. He participated in the coin toss, but could only watch while the Irish opened the game with three clock-consuming drives resulting in 13 points.

USC’s much-criticized defensive caution under assistant head coach Monte Kiffin was exploited by the Irish, with Golson patiently finding the sags in the Trojans’ pass coverage for 181 yards passing in the first half. Riddick went 9 yards for a TD in the first quarter, but USC also stiffened to hold Notre Dame to field goals twice in the red zone.

Notre Dame held its 12th straight opponent without a first-quarter touchdown, but Wittek found Woods for a 9-yard score on the first play of the second quarter — just the ninth touchdown allowed by Notre Dame all season long. The Irish took a 16-10 lead to halftime when Brindza hit the second-longest field goal in Notre Dame history.

Te’o made the seventh interception of his phenomenal season when Wittek threw directly to him on USC’s second play of the second half. Both teams struggled to move the ball in the third quarter, and USC settled for a field goal with 9:20 to play just a few moments after Kiffin called a timeout right before a play that ended with Lee appearing to catch a pass on the goal line.

Palmer’s return not a topic for Bengals