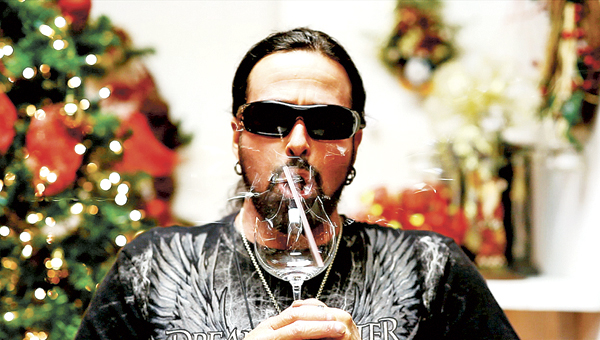 Jamie Vendera has built a reputation on his powerful voice and ability to shatter glass, a feat that could soon land him in the Guinness Book of World Records.

The Franklin Furnace vocal coach and author has submitted paperwork to be included in the famed records book after shattering three Schott Zwiesel wine glasses — a brand that is touted as setting new standards for breakage — in less than five and a half minutes with nothing more than his voice.

The record attempt was filmed inside Family Creations located on Third Street in Ironton so that the assortment of Christmas décor could be used as a backdrop.

“I was asked to film myself shattering a glass for a holiday commercial for my keyboard endorser, Alesis. I was simply going to use my cell phone,” Vendera said. “But my film production partner, Sean Daniel, suggested we do it the right way. So, when we were filming, I felt in great voice and Sean suggested we go ahead and film for Guinness World Records to time how quickly I could break three wineglasses. Glad he pushed me. We got the job done!”

Using the methods that he created, Vendera has turned his two-octave range into six octaves with 120 decibels of raw vocal power.

Vendera says his training allows singers to unlock their voice by creating a variety of primal sounds. This allows them to unleash the power of vocal resonance and projection. He says his secret lies in his unique approach to training.

“It is a combination of tapping into your primal scream, unleashing the power of true breathing and using your mind to master your voice,” he says in his promotional material. “It develops vocal muscles, much like body-builders develop their biceps by lifting weights.”

Daniel, owner of Sean Daniel Media in Ironton, and Vendera have also partnered to produce a series of vocal training DVDs that follow the concept of Vendera’s “Raise Your Voice” books. The first two DVDs in this series have already been released and more are in the works.

“Each video is designed to be as simplistic as possible in order to make the art of voice strengthening easy to understand and extremely effective,” Vendera said. “ I have envisioned a video training series for over five years but it only became reality after partnering with Sean Daniel of Sean Daniel Media. As of this point, six videos are planned for the series.”

To watch Vendera break the glasses go to http://tiny.cc/hv4cow. For more about him, visit jaimevendera.com or email him at venderaj@msn.com.

At least 1,500 parcels to be offered   Approximately $2 million worth of parcels will be put on the auction... read more