Man given 60 years in prison for rape 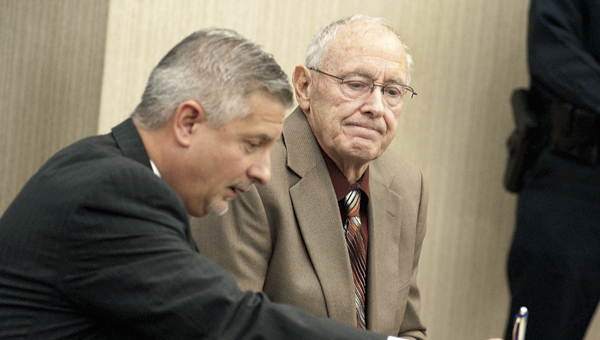 Although three sisters were spared the anguish of testifying in court to the years of abuse from their uncle, the siblings spoke out to the judge and to the man who harmed them, closing an emotional chapter in their lives.

Monday afternoon, the Lawrence County Common Pleas courtroom seats were filled with family members and supporters of the victims, as well as the defendant, Don Copley, charged with the rape of his three nieces.

Before Assistant Prosecuting Attorney Brigham Anderson recommended sentencing for the man, the sisters gave tearful statements of the fear they continually lived through, even after they had become adults.

“This man has haunted our lives,” said Victim 1, oldest niece of Don Copley. “He took my innocence. He took my relationship with my husband.

“All I want to be able to do is move on from what you’ve done to us,” she said directly to her uncle.”

Rather than go through with the trial Monday that had been scheduled since September, Copley, 69, of 1518 County Road 70, Proctorville, pleaded guilty to 15 counts of first-degree rape Monday morning. The man will likely spend the rest of his life in prison, a sentence of 60 years.

Copley was indicted by a Lawrence County Grand Jury in February after his three nieces, now adults, came forward to report the abuse.

The original indictment, charging Copley with 51 counts of rape, was amended to five counts for each of the three female victims, who were all, according to the specific counts, teenagers over the age of 13.

The original indictment also named a fourth victim, who was said to be under 13 years old. Those charges also dismissed.

“All I want to do is to be able to sleep at night,” Victim 1 pleaded to Judge Charles Cooper. “I know you are a wise judge. I just hope that you understand the impact of what he has done to us. … This is my ‘goodbye.’ This is my ‘it’s over.’”

Victim 1 said she somewhat blamed herself for not being able to protect her younger sisters from Copley’s abuse.

“The defendant was able to commit these offenses by having the victims in his home,” Anderson said.

At the time the abuse began, the three sisters, ages 13, 7 and 6, had just been displaced to the Copley residence by the Department of Job and Family Services. Victim 1 had been raped by her father, Kenneth Copley, Don Copley’s brother, who was sentenced to prison for the crime in 1992.

Don Copley’s attorney, Robert Krapence, would later address the court, saying Don was also a victim of sexual abuse when he was a child.

Victim 2 asked Cooper to consider that Copley not only abused her and her sisters physically, but emotionally and psychologically as well.

“Since the age of 7 I have lived my entire life in fear, even as an adult, because of what Don Copley did to me. … “I want him to know after this moment, I will forget him and I will never think of him again.”

Victim 3 asked the judge to end the ordeal and give the sisters closure.

“I, myself as a mother, never felt safe as a person. I lived in fear my entire life. I ask that you take that fear away from me.”

Krapence, a Columbus-based attorney, asked that Cooper consider his defendant as a whole person, not just based on his crimes.

“Despite the events, he has tried in other ways to be a good father,” Krapence said, referring to Copley’s care of his biological nieces, saying he took them on family trips and provided for them financially.

Krapence also said Copley wanted to spare his nieces from testifying in court.

Copley also addressed the court, saying he didn’t know why the incidents happened.

“We have tried our best to love those girls as true parents, but that doesn’t justify…” Copley said, referring to he and his wife Beverly, who is also facing 41 counts of first-degree complicity to rape. “I thought we had moved on. I asked the girls to forgive me and they said yes.”

In addition to the 60 years of prison imposed by Cooper, Copley must register as a Tier III sex offender for the rest of his life.

Beverly Copley has yet to be scheduled for trial, Anderson said, and there will be a pretrial in the case in the next couple of weeks.

Anderson said the charges against her would likely be amended to child endangerment.

The Tribune’s policy, under most circumstances, is not to name or print photographs of rape or sexual assault victims.