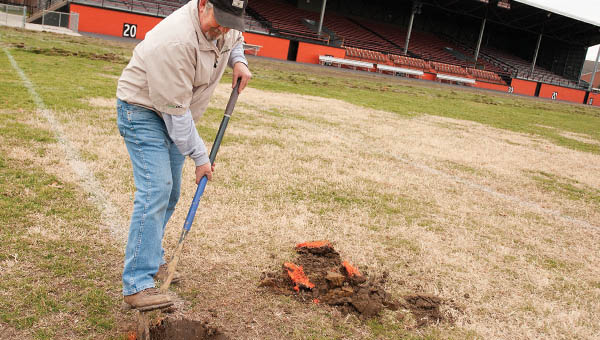 Stan Timberlake, with Sports Turf Group of Ashland, Ky., digs around the sprinklers during a renovation project at Tanks Memorial Stadium.

Work began Monday to rehabilitate the Bob Lutz Field at Tanks Memorial Stadium, following approval by the Ironton Board of Education.

The football field at Ironton High School is a grass field, and over time, it has developed some problems that needed repair, school officials say.

“It has lots of holes and undulations — ups and downs and dips,” said Ironton City Schools Superintendent Dean Nance. “As you can imagine, it makes for a very unsafe surface to run on.”

Nance said the uneven surface could lead to injuries. While it is unclear on whether any sprains already incurred are a direct result of the field’s condition, “common sense would tell you you’re less likely to turn your ankle on a smooth field,” Nance said.

Sports Turf Group, LLC will be taking off the old grass, shaping the field and sowing new Blue, Rye and Tall Fescue grass seed. The process is expected to take a couple of weeks.

The field rehabilitation will be a temporary plan, while funds are being raised to put down synthetic turf.

A group of citizens, calling themselves the Turf Group, met with the board last year to discuss the benefits of a turf field. The expense of the turf, expected to cost between $600,000 and $700,000, was something the board of education couldn’t afford at the time, Nance said.

With the goal still out of reach, the board of education voted to go with field rehabilitation for a more manageable cost of around $25,000. “For safety reasons, something had to be done,” Nance said.

Nance said he wanted the public to understand that the work being done on the field doesn’t mean the synthetic turf project will be put on hold or discarded.

“We are just trying to do something to carry us over,” Nance said. “We need to make it as safe as possible for the group that’s playing now.”

The Ironton Board of Education has a link on the website for anyone interested in donating to the turf project, and plans to assist and support the Turf Group with fundraising efforts.

“I would like for the people to know what we’re doing, and that we are doing it in the efforts of safety,” Nance said. “It’s not in any shape or form that we don’t want turf. We just don’t have the money right now.”

Ironton High School will be inducting its first Hall of Fame class this year, and would like the public’s help... read more