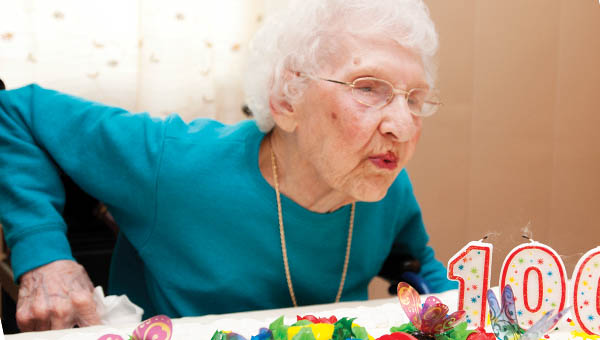 Dressed in a teal blue pant suit and a solid gold chain necklace, Thelma Crance greeted her guests at a party she never imagined she’d be having — her 100th birthday bash.

“I’ve never seen such a nice crowd,” she said to her guests at the dining room of the Sanctuary of the Ohio Valley Thursday afternoon. “I want to thank everybody for coming. In a way (turning 100) is awful. In a way it’s ‘Oh my, whoever would want to be 100?’ But here I am and I’m enjoying it.”

Joining Mrs. Crance were her daughter and son-in-law, Sherry and Ray Gibson of Ironton and Lawrence County Commissioner Bill Pratt and his wife, Stephanie, along with the staff and residents of the Sanctuary.

Pratt presented the centenarian with proclamations from the Lawrence County Commission and the City of Ironton, on behalf of Mayor Rich Blankenship who had to be in Columbus, declaring Dec. 1, Mrs. Crance’s actual birth date, as Thelma Crance Day.

“This is wonderful,” she told Pratt. “I will put these over my bed.”

Mrs. Crance was born Thelma Lautenslager in Newark, but called Ironton home after she moved with her parents, Karl and Pauline Lautenslager when she was 2 years old.

However she spent a great deal of her teenage years traveling with her parents throughout the South as her father was a semi-professional baseball player.

In 1931 she graduated from Ironton High School where she was in the Girl Reserves, Camp Fire Girls, the Home Economics, Scribblers and Dramatics clubs.

For eight years Mrs. Crance worked in the Ironton City Water Department for Gene Mooney and for most of her life she has been a member of Christ Episcopal Church with the current distinction of being the church’s oldest member.

Besides her daughter, she is also the mother of David Massie of Boise, Idaho. She was the wife of George Krell, Curtis Massie and John Crance. John Crance owned and operated the Elm Street Market.

After the proclamations were read, Mrs. Crance cut the first piece of her chocolate and white birthday cake decorated with blue and red butterflies and blue and red icing roses, compliments of the Pick ‘n Save bakery.

“I certainly didn’t expect so many people,” she said. “I hope you are enjoying my 100th … that is hard to say. If anyone wants one, just keep on trying.”

The Ironton City Welfare Mission broke a record on Thanksgiving Day when it served 948 meals to those in need.... read more