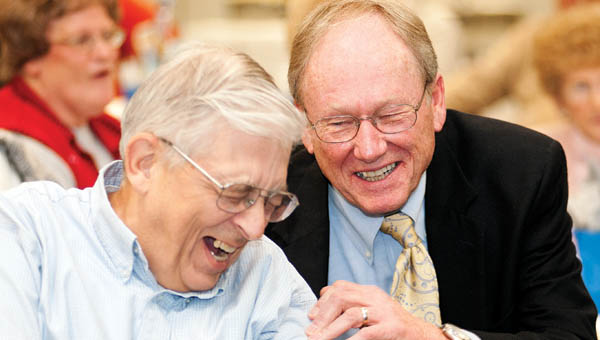 PROCTORVILLE — The tabletops at Ohio University Proctorville Center Friday were adorned with childhood photos and career snapshots of a man who has spent a lifetime working for his community.

Colleagues and friends said farewell to Bob Smith, who is retiring as director of the Greater Lawrence County Chamber of Commerce, at the organization’s monthly membership luncheon.

Past presidents of the chamber spoke about their time working with Smith and others shared memories of the man who has been a household name in the Tri-State for decades.

“A common name, but an extraordinary man,” Stephanie Burcham, director of the Proctorville Center and past chamber president, said of Smith. “Does anyone in this room actually believe he is going to retire?”

Another past chamber president, Doug Korstanje, reminisced about growing up and watching Smith deliver the 6 p.m. headlines.

“In my family, it was quite an event for the evening news,” Korstanje said, noting no one was allowed to speak when Smith was on the air.

Known for his distinctive voice, Smith made a 35-year-career of broadcast journalism, from his time as a staff announcer and weatherman for WHTN-TV, Channel 13, now WOWK-TV in the 1960s and onward to WSAZ-TV as a news anchor.

Smith also taught at Ohio University Southern and led a $5 million fundraising campaign as its director of development.

Most recently the Huntington, W.Va., native and Proctorville resident spent the last four years as director of the chamber of commerce — expanding its membership, introducing social events like the Business After Hours meetings and spotlight dinners, as well as growing the Young Professionals organization.

“I am the one who should be throwing the party for you,” Smith said to his well-wishers. “… I could not have done anything with out your help.”

The event was not without laughs. As a longtime broadcast journalist, Smith was honored with a blooper reel courtesy of WSAZ.

Smith’s children Scott Smith and Sherri Smith also gave a presentation, both touching and humorous, about growing up with the man.

“Everything he did he did with tremendous seriousness and commitment,” Scott said.

“He never forgot where he came from,” Sherri said. “He turned down national network news positions. He wanted to stay in the community he came from.”

The two also divined the answers to questions written on cards sealed inside envelopes, just like Carnac the Magnificent, a comedic role played by Johnny Carson on “The Tonight Show,” a program the family used to watch after Smith came home from delivering the 11 p.m. news.

Psychological warfare — How did Bob Smith get his children to clean their rooms?

Two weeks — How long was Bob Smith sick after riding with the Blue Angels?

Thirteen — How many times has Bob Smith retired?

As a send off, the money raised from the luncheon and from corporate sponsors will go towards a vacation for Smith and his wife Billie. Each past chamber president and other staff members chose their own dream vacation destination and asked Smith to decided.

There were 12 destinations in total, from a Canadian Rocky Mountain train excursion, to tropical island stays, to cruises all over the globe.

Smith said he was leaning towards the Australian cruise suggested by Stephanie Burcham, but that he would have to discuss the choice with his wife.

Political wives talk about how they cope, campaign and care for their families Juli Brazzell was a student at Lipscomb... read more