Christmas decorations come to park despite visit from Grinch 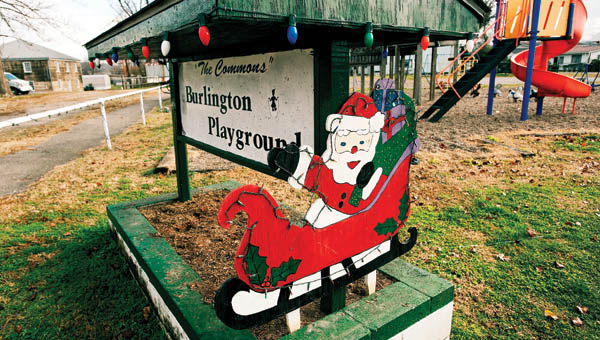 BURLINGTON — Volunteers from the Burlington community were heading to the Burlington Commons one Saturday last month to put the finishing touches on the annual Christmas display there.

When they got there, they found someone had been busy the night before.

“(The lights) were torn and broken in half, thrown on top of the gazebo,” Margaret Pennington, president of the Concerned Citizens decorating committee, said. “They unscrewed bulbs and broke them on the concrete. We had to start it all over again.”

And start all over the group of 12 did to come up with the angels, reindeer, Mr. and Mrs. Santa Claus and Nativity Scene the community looks forward to each Christmas at the park for the past five years.

“We got upset about it but that happens,” Pennington said. “A bunch of us seniors get together to do this. We talk. We play. We eat. We talk about our grandchildren. Mainly we do this because we have children and grandchildren.”

The majority of the decorations are handmade by members of the Concerned Citizens, including the bell by Pennington’s 13-year-old granddaughter, Olivia Pennington.

“We made those angels around the wall,” Pennington said. “We tried to get the colors of the different races.”

“The park hasn’t always looked as good as it does right now,” Pennington said. “We figure the more you do the more people gravitate to that. We are trying to get people to come down with their families.

Early next year, some Ironton residents will find out if they have structures just a little too close to the... read more