Holiday cheer comes from big-heartedness of others

CHESAPEAKE — The upcoming holiday food basket and toy giveaway at the Chesapeake Community Center is benefiting from the generosity that comes from the Christmas spirit as toys were recently showered on the center to make the season brighter for others.

More than 600 new toys and six new bicycles were collected in a districtwide drive at the Chesapeake schools and taken to the center on Monday.

The lion’s share of the largess came from the children of Chesapeake Elementary who spent the month of November filling up wrapped boxes placed in the front hall of their school with everything from Barbies to games.

“We told them if they brought in a toy they could stand up in front of their class and talk about it,” Trisha Harris, assistant principal, said. “Every day they would peak in the boxes and watch them overflow. I started with one box and it filled up and the second filled up. They filled up four boxes and it overflowed.”

Monetary contributions from individuals and businesses in the Chesapeake community totaled $1,500 and staff at the school shopped on Black Friday and this past weekend to add to the collection, including buying the bikes.

“I think (the students) have learned how much fun it is to give and you can get a lot of joy,” Harris said.

On Friday the center also got a boost when Jim and Mary Ebersbach of Wilgus were looking for a new home for some of the 500 beanie babies they have collected for the past 10 years.

“My wife has been collecting them since we retired,” Ebersbach said. “When they first came out, they were popular and high. Some you would pay $100 for. We paid the cheap (price). We bought them and put them in a bag and that is where they would stay.”

When Ty Warner, Inc. the manufacturer, stopped production, many collectors thought the toy’s price would soar. However, popular demand brought production of them back and the possibility of their becoming collector’s items dropped.

“We bagged all of those,” he said. “They were never played with, were brand new.”

The Ebersbach decided to keep about 175 to use to decorate the numerous Christmas trees they put around their home.

“We put up 10 big trees and one tree is a patriotic tree,” Ebersbach said. “The White House puts out historical ornaments and a lot of those bears were patriotic. We use them around that tree. And we have one tree that is a Noah’s Ark tree and we have nothing but beanie bears on it.”

Ebersbach contacted Father Charles Moran of St. Ann’s Church in Chesapeake and a member of the Community Mission Outreach that handles the toy and food giveaway.

So the couple loaded up 355 beanie babies and drove down to Chesapeake with their haul, which Ebersbach estimates to be $4,000 worth of the stuffed toys.

“We thought they are here and we never do anything with them,” he said. “Some kids don’t get much. They are not a lot. They are just a beanie baby, but they are something.”

However Moran was happy to store temporarily the four boxes of the toys in the garage of the rectory before taking them to the center.

“We expect the Lord will test our hope and yet come through,” Moran said. “People have an understanding of life and enjoy that and want to share that with others.” 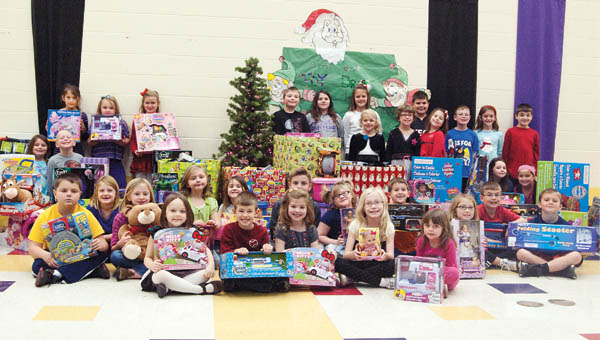 Students from Chesapeake Elementary School show off the toys they collected as part of an effort to help the Community Mission Outreach Christmas giveaway.

IRONTON — No one was seriously injured in a two-car accident on State Route 93 Tuesday morning. The accident happened... read more