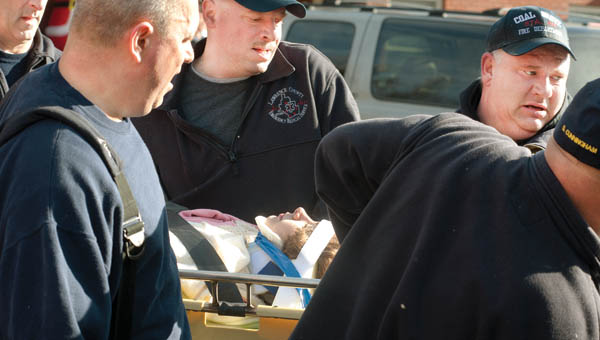 Ironton resident Amber Farmer was escorted by various agencies of first responders after she was rescued from a hillside behind her home Thursday.

Make sure you find that little girl before you come home.

That’s what Decatur Township volunteer firefighter Don Henry’s wife told him Thursday morning before he headed out to join the search for a missing Ironton teen.

Henry heard the alert come over his pager at about 8:30 a.m.

The overnight search for 14-year-old Amber Farmer, reported missing by her family about 4 p.m. Wednesday, had been unsuccessful, so Henry and his Weimaraner, Shadow, headed into town to aid in the rescue efforts. By 9 a.m., Henry and Shadow were searching the wooded hillside near where Amber had been last seen with her Shih Tzu, Tobey.

After picking up Amber’s scent at her home at the Lawrence Street Apartments, Shadow pulled Henry up the hillside, following the trail.

Having worked closely with Shadow, training him for emergency search and rescue, Henry knew it was all up to the canine.

“You don’t search for the person,” Henry said. “The dog searches for the person. … You’re searching somewhere else that nobody has torn up the ground. Four-wheelers haven’t been on the ground. And then when you get a scent from the person, the dog picks up on the scent and you don’t say ‘go this way, go that way.’ You follow the dog.”

After about an hour and a half of searching, Shadow led Henry right to Amber.

The girl was still, lying near a rock cliff. Henry saw her Hello Kitty backpack. She was covered in a blanket, Tobey by her side.

Thinking freezing temperatures had taken its toll on the girl, Henry approached.

“When I got up to the top of the hill, she was hunkered over and at first I thought we had lost her,” he said. “I went over to her … and I kinda looked over and she was breathing. I started speaking to her and she started talking. It was a big relief for me.”

Henry, emotional at the discovery, radioed in the good news.

James Stapleton, the girl’s father, was waiting in the parking lot of the complex when he heard rescue crews had found Amber.

“I was flipping out,” Stapleton said of the previous 18 hours. “You know, I didn’t know. I really didn’t know. I was scared to death. I was here when they found her. It was a big relief.”

A short time later, a crew of firefighters trained in rope rescues and law enforcement emerged from the woods with Amber secured to a stretcher.

Family members and friends of Amber stationed at the apartment complex joined hands for a moment of prayer after she was placed in a Lawrence County EMS ambulance, ready to head to Cabell Huntington Hospital with her mother Stacy Stapleton.

Acting Ironton Police Chief Chris Bowman said later that Amber had told authorities she ran away because of a dispute with her mother.

“She said she was out there all night,” Bowman said. “It was very, very cold last night.”

Bowman also said Amber claimed she fell down the hillside sometime before she was found. Despite the cold, Bowman said Amber was expected to be released from the hospital soon with no serious injuries.

“We are just of course glad she is back and safe and certainly appreciate all the help we received from fire departments, police agencies, the public,” Bowman said. “It was an outpouring of people out there. They called. They came out there and wanted to volunteer to search for her.”

Ironton Mayor Rich Blankenship was also on the scene of the rescue.

“A lot of people did a great job,” he said. “It was outstanding. It’s just a good outcome.”

Tracy Farmer, Amber’s aunt, said she ran from her home when she heard the news that Amber was found.

“I just ran here from my house,” Farmer said. “I beat her off the hill.”

The search and rescue began Wednesday evening with a helicopter search by the Ohio State Highway Patrol and a canine unit from the Huntington Police Department. Dogs picked Amber’s scent but later lost it.

Board OKs attorney to get vehicles back to agency

The Lawrence-Scioto Solid Waste Management Board has authorized its attorney to get back ownership of the district’s vehicles from the... read more